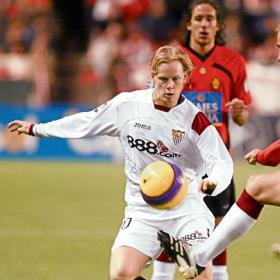 The papers in Spain and here in England are reporting that Sevilla's Tom de Mul could be making a January transfer to the Magpies after a rather unsuccessful stunt with the Spanish side. Tom, who just arrived not so long ago from Ajax in Holland has been dubbed as the next big thing in Holland and his followers including me, still believe that. De Mul hasn't settled at all in Spain and a switch to Newcastle could be just the thing he needs, and Premier Football the sort of football that suits his game. The question is, is whether this is Kinnear's target or the recruitment teams’? Either way it would be a good addition to the team and for the right wing, he's only 22 years old and in all honesty we never replaced James Milner.

The lads are working hard behind the scenes at Newcastle as we know and questions have been asked of Ashley and whether he will invest in the teams this January, we all hope he does. Last year we did however spend £10.3m on Coloccini, £5.75 on Xisco, £2m on Bassong, £2.5m on Guthrie and Jonas Gutierrez was a free however we may well have to pay a fee for him if we lose the court case. The Summers dealings saw us spend £20.5m and you can't say we didn't spend. January may see us cut back on spending a little and that is no music to the fans of Newcastle. If we can get in 3 or 4 players similar to Gutierrez, Guthrie and Bassong then it would be a very successful 31 days in the market.