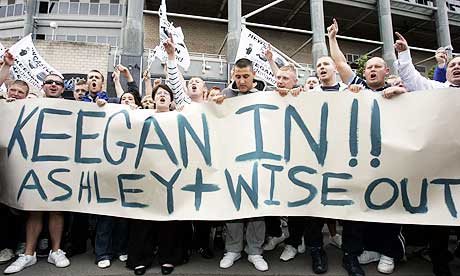 There is news today that NUSC are planning a protest at the Everton game to signal their intentions once again. It is clear they have wanted Mike Ashley out after Keegan's departure and that is acceptable. However planning a protest at such a time when we are deep in a relegation battle and have got our 1st win in some time is stupid, very idiotic indeed. The players need us more than ever now and especially against Everton, if we win that game it would be a great great win to say the least. Morale is high at Newcastle at least higher than it was a while ago and we need to keep it up.

Ashley and Kinnear did try for players like Veloso, Michael Johnston and Kieran Richardson (yes the Sunderland one) but we failed because the clubs were looking for too much or the player failed a medical. We have however done some good business with Peter Lovenkrands who scored on Saturday 😀 also with Kevin Nolan and perhaps the pick of the bunch a swap which saw us receive Ryan Taylor for Insomnia. Taylor provided the assist for the decisive goal on Saturday and he gave it his all which we like to see, considering the position we're in. So all in all this protest is stupid and will not change anything expect the headline on the Sunday newspapers who no doubt will tear into the Toon if this goes ahead.

To all considering protesting please don't bother, do all the protesting you like when we are safe and dry come June 🙂