Ginola tells Newcastle players to pick up the pieces 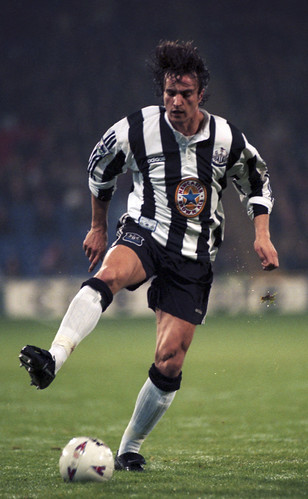 Former Newcastle great David Ginola has today came out and said that the Newcastle players need to pick up the pieces and quickly if they're to survive in the Premier League this year. Ginola has watched from a distance as his once mighty Toon Army have dropped to a terrible state. He thinks that Shearer can keep them up and he's not the only person to say so. It seems everyone believes Shearer can keep them up as do we, but it will be a very tough task if we manage to stay in the Premier League. Shearer has nothing to lose taking this job and everything to gain, let's hope he keeps us up though.

‘My worry is not Alan Shearer and the job he can do. It is a concern about the Newcastle players.

‘You have to understand that when players are in certain situations, especially relegation, they must concentrate on their job.

‘If the club is relegated the most important thing for me is that it will be the fault of the players ultimately, regardless of what has gone on.

‘What are their jobs? Why are they here?

‘Are they worried about which club they will play for next season or helping Newcastle stay up? They weren’t brought to Newcastle to help stop the club getting relegated – the idea was that they were signed to challenge at the top end of the table.

‘That hasn’t happened. But Alan has come in and it is something he can continue to change.

‘Whether it is mind games or hard work I don’t know, but there is plenty of time for everybody to pull together and rescue the situation.’

We'll never forget his performance against Manchester United when we triumphed 5-0 and I'm sure neither will Ginola himself. This time it's about Shearer and keeping Newcastle United in the Premier League.