Great win against Boro but Newcastle need another 3 points 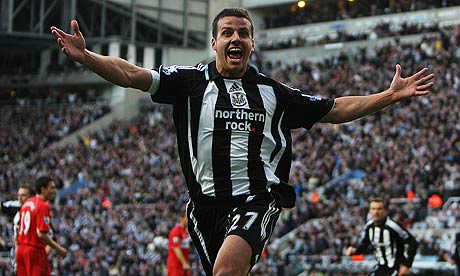 Finally we've managed it, after a long wait, about 18 games to precise, we've got our first win and our first three points under Alan Shearer's guidance. After wrecking our chance against Pompey at St.James’ the lads were determined that it wouldn't happen again. However after 3 minutes you couldn't help but wonder if we were in for the same rigmarole but when Danny Guthrie's great corner was met by an even better header by local lad Steven Taylor you just got the feeling it had to be our night.

Some great skill from Tuncay led Habib Beye to fumble the ball over the line and gift Boro a dream start. However, 6 minutes later the local lad, with a pristine header drew back on level terms. Indeed we could've added more before the break but we didn't, although we could've conceded another one if luck didn't happen to be on our side. In a substitution which saw Michael Owen depart and Obafemi Martins to come on, 55 seconds later Oba Martins had given us a 2-1 lead with a great goal. A header fell in his path and he dummied before slotting it home with his right foot, luckily enough he got the shot off before slipping.

The nerves set in by then and Boro tried to step up the pace of the game, indeed it was their all out attack which left gaps at the back and Kevin Nolan assisted Peter Lovenkrands for a great third goal. It was a great flip down by Martins to Nolan and a wonderful ball from Nolan to Lovenkrands who finished with class. Mind you, we could've added another with young lad Andy Carroll but the Boro keeper saved well. things are looking better now but a win at Fulham would all but keep us safe as we can't see Boro and Hull winning two games in a row. Maybe West Brom will but it's highly doubtful. A win at Fulham would be great and maybe a point at Villa. Come on lads! Produce another good performance and take home another 4 points.