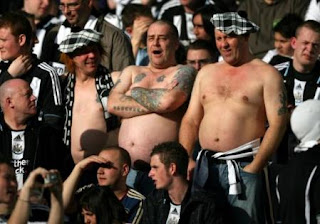 16 years. Top spot finishes consistently. 5-0 victories v Manchester United. Goal fests against the other top 3. But now, were not even in the same divsion as them, Come August we'll be playing in the Coca Cola Championship or as they call it, ‘The Fizzy Pop League’. It's been a fatal season for Newcastle this year. 4 different managers, different team each week, constant injuries and an owner who thought NUFC was a toy he could simply toss from his cradle. The moment Kevin Keegan resigned, troubled loomed. We appointed Joe Kinnear as ‘temporary’ then permanent and then he had a serious health problem which left the reigns at the feet of Chris Hughton. After poor results and on April Fool's day local hero Alan Shearer was appointed as manager. You can now see why Newcastle were relegated at Villa Park on the 25th of May 2009.

An extremely unfortunate goal, rasped off Damien Duff and beat Harper. Besides that you'd think there'd be some urgency about the players. There didn't seem to be and we never looked like scoring. 94 minutes ticked and Newcastle were officially a Championship team. Literally unbelievable for some fans , as for me sad but not the end. You'd have to blame Mr. Ashley for a lot of this. Enough said. This time there will actually be a massive clearout at St. James’ Park. We'd expect the fans favorite Obafemi Martins to leave too. Whatever happened to the once big NUFC? One thing's for sure, the fans will always be bigger than the club. The Toon fans are a credit to football 🙂