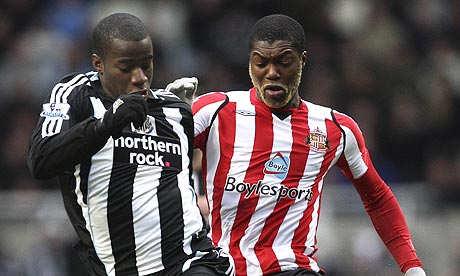 News has broke today that Sebastien Bassong, Newcastle's best player last season by far is on the verge of joining Tottenham. Well no really but apparently Spurs are leading the chase to sign the Cameroonian international. We expected high demand for this player and we would be surprised if Arsenal didn't come in and make a suitable offer. Indeed we know Seb wants to leave but how much will he go for is another thing. Hopefully in the region of £8-10m if he does have to leave.

A source close to Seb said :

“We’re waiting to hear back from a couple of other clubs regarding Seb, but Tottenham are definitely keen,”

“It’s still early days, but we do expect things to be resolved quite quickly once teams report back for pre-season’

Our ‘team’ will report back for pre-season but then again Friday, tomorrow, is apparently D-Day for Alan Shearer and maybe Newcastle United football club. We'll just have to see what happens, it's all we can do.