Newcastle miss out on another talented youngster 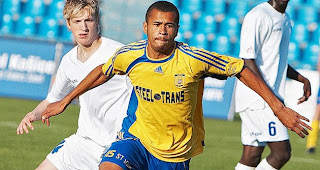 Although we know that there probably won't be any new faces arriving this summer to Newcastle United it's irritating to see where the players, that could be Newcastle players, go to different clubs. For example , Kyle Naughton went to Spurs, fair enough, we mighn't have stood much of a chance there, but Daniel Fox went to Celtic, I think we could've snapped him. Jermaine Beckford has been taken off the transfer list although his agent stated he wanted to join Newcastle pretty much and Simon Cox going to Brom, although I'm sure he'd be tempted to join Newcastle if he was given the chance.

The latest guy we've missed out on is Dionatana do Nascimenta Teixeiru or more commonly known as Dionatan Nascimento, is all set for Blackburn Rovers and Big Sam. This guy was on trial at Newcastle United months ago yet even though he impressed Newcastle let him go and wouldn't reach the price wanted by his club MFK Kosice. Although our production of youngsters is probably the best thing we've going for us, we seem to miss out on an awful lot of targets. This lad is going to be top quality and will end up being a great asset for Blackburn as well as his national team Brazil.

I know there's a transfer embargo on the club at the moment but it shouldn't stop youngsters coming in. Although that's pretty impossible because of the scenario we're in it's disappointing to be missing out on these players, who could do a great job for NUFC. It seems that we won't have new owners this summer because, well we don't know , and it looks like there won't be too many high earners leaving. Frighteningly we could start the season with give or take, the same squad that got us relegated. Although we've continually said we don't want to do a Leeds United and that we won't , it's looking as if we we'll be doing a lot worse than that, sadly it's happening to the best fans in England.