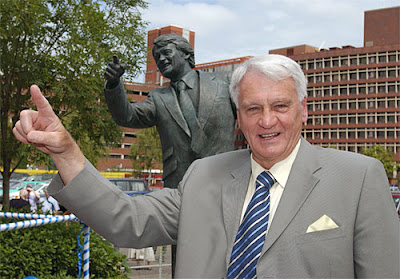 Your usual takeover talks goes out the window when you hear something like this. You are stopped in your tracks. When I heard Bobby Robson had died today, it shocked me although I can't say I didn't expect it. Sir Bobby, has been battling cancer for the fifth time and eventually, the horrible cause got the better of a true legend. No fan in England won't know that famous name that is Sir Bobby Robson and no one will have a bad word to say about him, simply because he was a gentle, caring man who had football running through his veins

Robson managed them in what could have been Newcastle's best ever seasons. Who'll ever forget his first game in charge of Newcastle when we thumped the opposition 8-0? Who will forget ‘that’ goal which help us beat Manchester United in a packed St.James’ Park them many years ago. Indeed who will forget his ventures with England, bringing them inches from a World Cup Final. Every player that played under Robson only has good memories. He gave everyone a chance to prove themselves and always had a good relationship with all the clubs hierarchy.

Bobby will be long remembered, so many memories. Alex Ferguson and Fabio Capello have already led tributes to the legend and a memorial type service will be on Sky Sports 1 at 7pm as far as I know.

You will be missed Bobby, but never forgotten RIP.