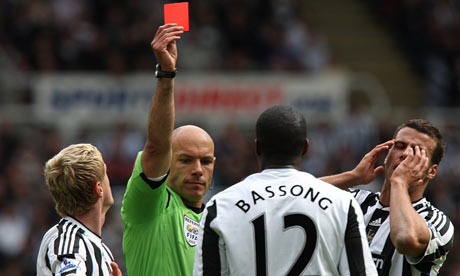 As the rumours get the hopes up on Tyneside we are let down again , this time the Chronicle are claiming that the club will more than likely be under the control of Mike Ashley. We've had Malaysians, Singaporeans , Americans, Irish, Chinese, Dubai, Iranians, Nigerians, Englishmen and Sunderland fans hoaxes throughout our takeover journey. We hoped that after relegation things would've picked up and maybe with Shearer appointed as manager and new owners we could just make the play-offs but now, there's not much chance of this happening.

We then lost a worldwide hero in Bobby Robson's death and now surely we're due some good news? We reportedly rejected a £10m for Bassong from Spurs last weekend and now the Frenchman has been fined by NUFC for refusing to play against Dundee. Rightly so I think, he's being sold and we're just looking for the most amount of money we can get. He said today his desire is to play for Tottenham and that's no problem, if they muster up £12 - 15m. Sky Sports are reporting that Seb is desperate to work under Harry Redknapp and best of luck to him with his move. If we get over £10m for him then it'll be fine business indeed.

Chris Hughton said he doesn't really what's going on regarding transfers either and expects to lose a couple of more player which we suspect to be Habib Beye and Bassong himself.

‘It's always a blow to lose what you regard as a good player and I know don't if I'll lose any more before West Brom,’

‘It's a shame to lose a talented player like Oba.

‘I'm working on a day-to-day basis and don't know if more will go.’

Yet again it shows the poor communication between the board and Hughton, the main reason why we are where we are, manager less , and heading into the first game of the Championship. Will we ever get good news?