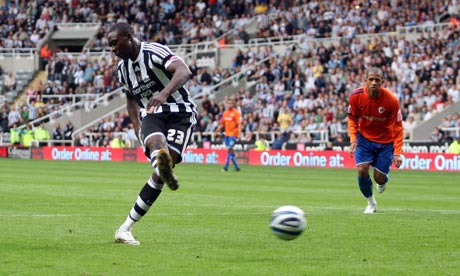 Who would've thought or indeed would've said, a year ago, that Shola Ameobi would be a huge loss to Newcastle United's strike force? Ameobi, who is Nigerian by birth is starting to show, this season at least, some of the quality the famous Nigerian strikers had. Bagging a hattrick against Reading, scoring the winner v Sheffield Wednesday and adding to his tally in the  Carling Cup vs Huddersfield, Shola has established himself as a real threat to Championship defences this season.

Unfortunately, it always has to happen at Newcastle, that we lose our leading goal scorer through injury, besides the great Alan Shearer that is. Ameobi limped off in that Carling Cup tie and he's expected to be on the sidelines for more than a month. Meaning he'll probably miss about 4 or 5 Championship games.

Luckily for us, we've a good youth setup, or did at least. The likes of Haris Vuckic, Nile Ranger, Kazenga Lua-Lua and indeed Newcastle's very own Ryan Donaldson are coming up through the ranks and ready to take their opportunity.

Toon fans saw the first real action from Donaldson and Vuckic as substitutes against Leicester and although they didn't have much time to impress, their confidence has risen to new levels. It's good to see Hughton introducing young talent in games, unlike the infamous Joe Kinnear, who never fielded anyone that he didn't like the look of, Hughton is willing to give most a try. Even Xisco has been given a chance, albeit in Spain.

It's quite ironic that we're relying on Ameobi to produce the goals considering some most Toon fans would've loved to have seen him sign for someone else. He had loan moves with various clubs, most notably Stoke City, I bet Tony Pulis wouldn't mind having him upfront now :0