Hughton has some money to spend 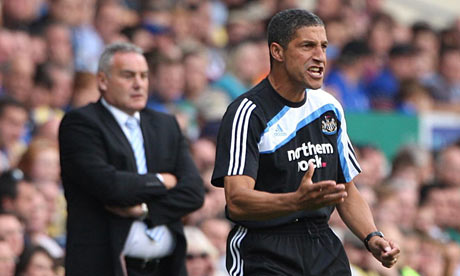 As surprising as it may sound, Chris Hughton has money to spend on new players at Newcastle. Even though we're stuck amidst a takeover and whatnot, Hughton has a little cash to spend on new faces, and we suspect that it's just a tiny fraction of what NUFC received in transfer fees this season. Reports were that on the last day of the transfer window, we had a bid of £1.75m rejected for defender Craig Cathcart, from Manchester United. However, the arrival of Cathcart is still a possibility with a loan move being rumoured to have been arranged.

We are constantly being linked with the likes of Marlon Harewood, Diomansy Kamara, Caleb Folan, Daniel Cousin and even James Vaughan these days but th possibility of even half of those ariving is very unlikely. What we do have though is Andy Carrroll and promosing striker Nile Ranger.

Carroll who nodded home yesterday against Blackpool has become a dad in the last few days, which is quite young at the age of 20 to be having children. However, there shouldn't be any financial problems in the Carroll household as Andy rakes in a handsome wage packet each week.

We expect more players to arrive yet, maybe even more of the same quality as Zurab, if we do, then well done Chris Hughton.