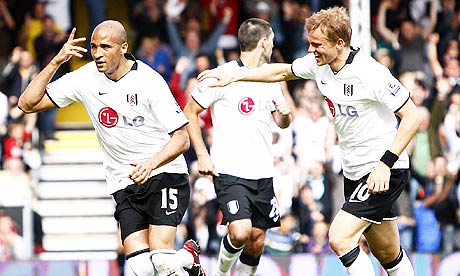 Diomansy Kamara is now unlikely to arrive to Newcastle on loan after Roy Hodgson dismissed reports and then started the striker in the Europa League affair yesterday. It so happened that he also scored in yesterdays affair and the odds of him joining Chris Hughton is very unlikely. We were hopeful that a deal could be sorted and indeed Chris confirmed his interest but it seems we'll have to look to Marlon Harewood, Daniel Cousin or Caleb Folan to boost our front men. Either or wouldn't be too bad in the CCC.

In other news, the major stories are about Newcastle's game against Plymouth tomorrow in St.James’ Park, a game which will hopefully see us rise to the top of the table again, pending other results in the league.

However, we've played two tough away fixtures against Cardiff and Blackpool and we've managed three points from them. That alone isn't too bad but hopefully we can get even more wins under our belt with new players coming in the door.

Zurab Khizanishvili will be set to make his debut tomorrow but will be out of the tie at Peterborough in the Carling Cup.

Howay The Lads and hopefully 3 points tomorrow to reward their brilliant fans.