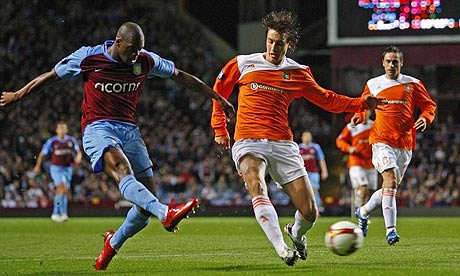 Marlon Harewood's agent today confirmed that the Villa striker was very close to a loan move to Newcastle. The Villa forward, who has been out of action for a considerable amount of time now was being tracked by Chris Hughton since August and after Harewood overcame his injury, Hughton was once again in for his services. As you all know, Harewood is quite a beast or physical player on the ball, he also has the ability to score quite a few goals and we'd expect a fair share of them, in his stunt on Tyneside.

It's a very good signing, albeit not completed yet, and adds a different dimension to Newcastle's attack. The need for long punts up field should be minimal, although we know they won't, and the option for the likes of Nolan and Guthrie to play the ball into Harewood's feet is now available.

‘I believe we are close to agreeing everything and hopefully the move can be finalised later this week,’

‘Marlon is back to fitness now and he is ready and raring to go.

This is good news, and hopefully now with Marlon on-board we can score a lot more goals, because one thing's for sure, we need to.