Forest fortunate to finish as winners? 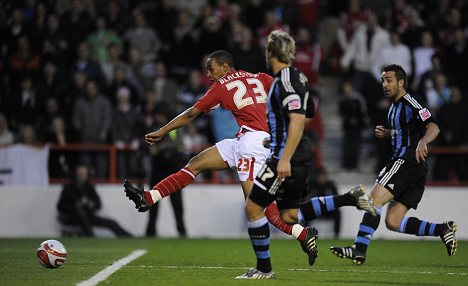 Well I think the first thing you have to say is Welcome to the Coca Cola Championship, Newcastle United. Today, a single albeit dubious goal from Dexter Blackstock saw off a Toon effort that just wasn't good enough on the day. My headline might suggest some haste in losing the game but in all fairness you have to give credit to Nottingham Forest for not laying back, and indeed giving it their all against ‘the biggest club in the league’. They've followed suit of Blackpool who before today, were the only team to have beaten us.

Although some decisions didn't go our way including a pretty blatant legit goal, we didn't really aid our cause. The first half wasn't anything special and we were punished a few seconds before the halftime whistle sounded.

The Forest fans were hounding everything that Newcastle touched and the atmosphere was one of anxiety. I suppose you could say Newcastle were unlucky and indeed Forest were fortunate to win this affair but we've been proved, once again, that the Coca Cola Championship isn't a comfortable ride.

As I said in an earlier article, Forest wouldn't be easy and I was correct to say so. Saying that, should the goal that was disallowed have been awarded, and had Nile Ranger pelted his header into the back of the net, it would be a very different analysis.

However, we have to get used to this and come to expect it. Playing Newcastle United, for lower Championship teams is like a cup final, every week.