When were Newcastle ever linked to Lloyd Sam? 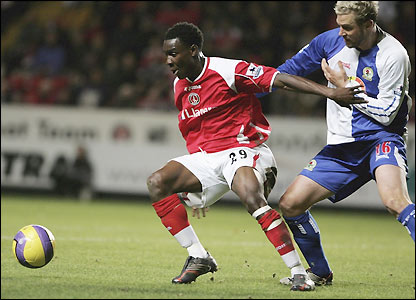 Sky Sports is running the story that Lloyd Sam, Charlton's winger, is not interested in moving to Newcastle. First things first, this is news to me, and I'm sure many other Toon fans. This is the first time we've been linked to this winger but it's rumoured that Chris Hughton was having a look at him all that time, or supposedly so. Although I for one have heard very little of this guy he's highly rated at Charlton and in League 1 it seems, with a whole host of other Championship clubs looking to avail of his services.

Speaking today on the speculation, he said :

‘I've not seen anything at the minute, and that's being completely honest.

‘I haven't started talking with the club yet, but I'm sure there will be some talks about it soon.

‘At the minute, I'm just playing football and trying to get promoted. I'm happy at Charlton. I've been here 10 years, I'm happy and I've got a relationship with the fans, too.’

I suppose the first thing we notice there is the fact he's been with Charlton for 10 years. Although, he's only 25 years of age still. Saying that, I couldn't see him making the first team for Newcastle.

Surely Chris is looking for a little better standard players, if looking for them at all. I wouldn't mind seeing Darron Gibson arriving as my regular readers know so well. However, I doubt Fergie will let him go, especially after his latest performances & goals.