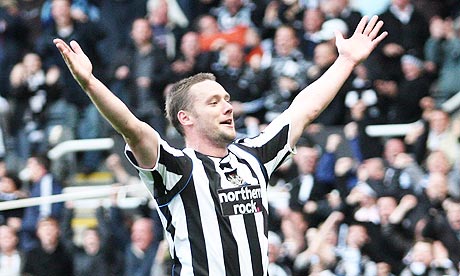 Newcastle today rued the chance to go ten points clear at the top of the Coca Cola Championship table with a 2-2 draw away to Barnsley. In a game that saw us lead twice and conceded an equaliser with 3 minutes left, from a corner was a bitter pill to swallow for some Toon players and especially the 7,000 travelling fans. The fans who made the trip were hoping for an eight win in a row but it didn't come thanks to B. Hassell header in the dying minutes. It was probably a just result but I can't comment too much as I haven't saw any of the footage just yet.

An opener from Kevin Nolan, bringing his total an impressive tally saw his return to the Newcastle side, following his absence against Coventry due to suspension an immediate winner.

However Hallfredsson equalised for Barnsley just after the break in what was described as an all out attacking display from the home side. The goal is said to have been a just equaliser and the hosts rewarded for their persistence.

It was Marlon Harewood who seemed to have gifted us all three points with 15 minutes left after he bundled in Andy Carroll's flick on, indeed boosting his goal tally at the club to a considerable amount.

We have been known to ride our luck as Chris has said and indeed Lady Luck shone on a brave Barnsley as they collected a vital point, and probably a deserved one at that.