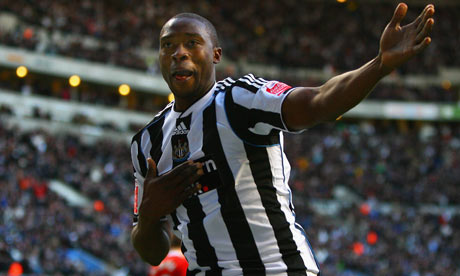 Another three points and another win against Middlesbrough. Well done Chris Hughton and well done the lads. In rather chilly conditions in St.James’ Park, Marlon Harewood & Shola Ameobi both netted to ensure that we will have a happy Christmas period with a ten point gap between ourselves and West Bromich Albion. Although the game started quite slowly and perhaps Boro having the better spell of possession, it was Marlon Harewood who latched on to a Shola Ameobi knock-down to slide the ball home and bring his tally to 5 this season.

The 2nd half didn't see a huge improvement on either side but both Jose Enrique and Fabricio Coloccini both shone as contenders for the MOM award. Our second goal saw Danny Guthrie deliver a fantastic ball from the right, to Shola Ameobi and the 6ft striker headed home, killing off any chance of a Middlesbrough comeback.

Ameobi did limp off later on in the match and had an ice pack attached to his right ankle, the same ankle which he injured a few months back. We certainly hope he's OK because he's a very important player, as we saw today.

With West Brom's game postponed this weekend, it means that we are now ten points ahead of second spot and about the same ahead of third. The race is really beginning to heat up now.

If we can keep this form going and avoid injuries then you just never know, we might get what we wished for, and I'm not talking about a White Christmas..