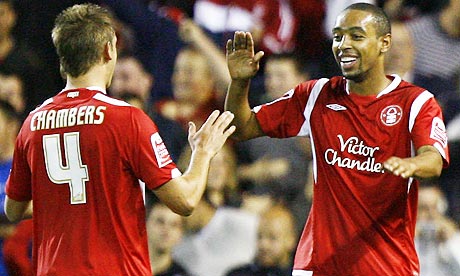 All the talk surrounding Newcastle United this last week has been about their transfer targets Jermaine Beckford & Matthew Kilgallon. However, with our game with Reading at the Madejski Stadium called off due to the heavy snow, all the focus was on tonights game at the Hawthorns. In what was a rumbustious display from Nottingham Forest, they ran out 1-3 winners against a West Brom side looking to close the gap on us to three points. With Forest lying 3rd themselves before kick-off, it meant an ideal result would have been probably a draw. However, it ended up being a comprehensive Forest win.

Goals from Dexter Blackstock, Radoslaw Majewski and Chris Cohen saw Forest develop a three to nothing lead just before the hour mark. A consolation goal from Roman Bednar meant that Forest, who are beginning to look like real promotion contenders,move up to second in the Coca Cola Championship table.

Tonights result isn't the worst for us because it means we're 5 points clear and have a game in hand on Forest. Meaning if we win our next match which conveniently is against West Bromwich Albion at St.James’ Park providing the Reading game isn't rescheduled for sometime midweek, we'll go 8 points clear of West Brom themselves.

Needless to say WB aren't our only challengers, Nottingham who beat us courtesy of a Dexter Blackstock goal a few months back are real contenders for automatic promotion, which is good to see considering the poor seasons they've had in the last few years.

As much as the transfer scenario is failing to excite us, the Championship battle will for sure.