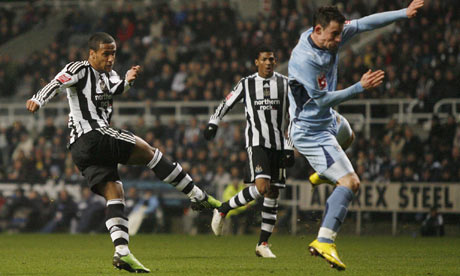 Well it does feel good to stay top of the table and even better to score four goals against a pretty decent Coventry City team. In what was a must-win game ( which ones aren't? ) the lads truly delivered. Although it didn't start the best, and it took us a little while to get into the game, we eventually got a grasp on the game and didn't loosen our grip on it once we scored. When Clinton Morrison put the Sky Blues ahead a lot of Toon fans thought we might be in for the same old, however a minute later we were on even terms again, with new-boy Wayne Routledge scoring his first for the club in emphatic style.

Goals from Andy Carroll just after the break, Peter Lovenkrands again bringing his tally into double figures for the season as far as I know, and a rare goal from Ryan Taylor, all finished off a brave Coventry City effort.

With West Bromich Albion drawing 1-1 with Cardiff City yesterday it meant all three points at home to Chris Coleman's men tonight saw us go top the Coca Cola Championship. Indeed we capitalized and secured all three points, with Preston North End up next in St.James’ too.

It's absolutely crucial we get the win against Darren Ferguson's side and it won't be that easy of a task. Although Derby County smashed 5 goals past them on Tuesday, (they smashed 3 past us too) I'm still expecting a much better performance from them. They'll be wounded beasts after the 5-3 mauling at Pride Park and we mightn't be up to scratch having just put four past Coventry.

We've entered the part of the season where the real promotion candidates will make their way forward and I think it's fair to say we'll be definitely one of them. If we can keep the form going that we have at home which includes 9 goals in our last 2 games, both against teams on the good side of the table, then we should be alright. Whether we can carry this form into away games remains to be seen but the good news is, we  haven't lost at home all season and it would be quite a record if we could keep that going until the very end and I'm sure Chris Hughton is hopeful they will.

Only time will tell but so far so good. 3 points clear at the top, hopefully to extend that gap even further.