Where will Joey Barton fit in once he comes back from injury? 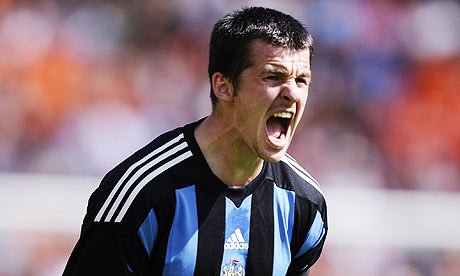 The recent performances of Danny Guthrie have been nothing short of fantastic as the former Liverpool midfielder continues to prove that he's more of an asset in centre midfield. Guthrie scored twice on Saturday and both were from distance. He's also got important goals this seasons like our home tie against West Brom, in the 2-2 draw. The forlorn figure of Joey Barton will reappear from Newcastle United's dressing-room in the next week or so but I can't see him breaking into the Toon starting 11 straight away anyway.

Barton has had problems and we know that more than anyone, however, he's managed to stay a Newcastle United player through all the regimes on Tyneside and has kept his £60,000 wage-packet close to him too. Saying that, Joey's a talented footballer and I really hope he can show us some of that potential in the run-in to the Coca Cola Championship season.

Alan Smith, Guthrie as I've mentioned, and even Nicky Butt will look to claim first team spots but no doubt Joey will be eager to be named on the starting 11 as soon as possible. I suppose if we can get promotion looking a certainty in the next month or so, we can ease him back into the action and let him get ready for what'll be a vigorous Premier League campaign. if we get there.

Either way, it's good to have options in midfield more than anything and our midfield is indeed providing goals for our front men which is always a good thing.

Do you think Joey Barton will walk his way back into the Magpies team?