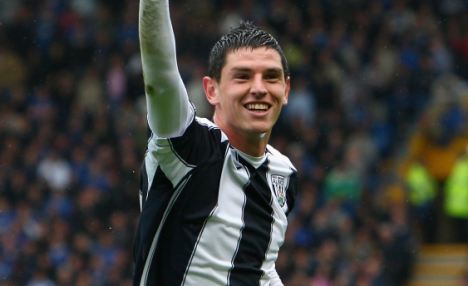 West Brom earned a very good win away to Paolo Sousa's Swansea City today, something we weren't able to manage, and it's 3 points which could prove crucial to Roberto di Matteo's promotion push with West Bromwich Albion. I've lost count of the amount of times West Brom have won it in the dying minutes of matches but not only that, the sheer amount of penalties they seem to get along the way. Graham Dorrans has rocketed up the scoring charts in the Coca Cola Championship thanks to the penalties he's put away from 12 yards.

Nottingham Forest lost away to Barnsley tonight and a lot of Forest fans are losing optimism of that other automatic promotion spot. However, I'd be very surprised if Forest don;tend up pushing West Brom for that 2nd spot, should we even manage to finish first. Who knows, it could well be us yet who'll be looking for that 2nd place promotion spot.

As much as we'd love a trip to Wembley, a play-off is a no thank you, strange things have happened to sides in the play-offs once they grace the Wembley pitch!

I personally can't help but get frustrated by West Brom fortuitous form in some away games, scraping wins in the dying seconds and winning thanks to some dubious penalty decisions. However, good sides always grind out results so we have to hand it to them, they're a good footballing team.

Up next for us tomorrow is Nigel Atkins Scunthorpe who will be up for the game on Tyneside tomorrow. They're in a relegation battle and tonights results at the foot of the table will have brought mixed news to the Scunnie camp. Peterborough lost in the last minute as did Crystal Palace, but Watford got a precious win.

As long as the lads concentrate tomorrow and get the ball down and pass it around, we should get all 3 points in front of a forty-thousand expected crowd in St.James’ Park.