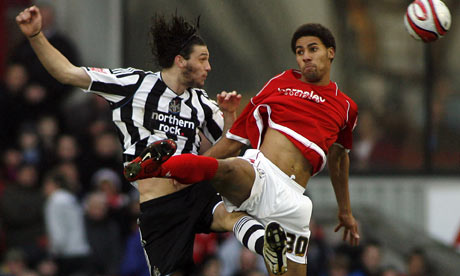 Andy Carroll has responded extremely well to the bad news surrounding Newcastle United and indeed the incident between the two local lads, Steven Taylor and Carroll. In fact a goal on the hour mark away to a very good Doncaster side to secure a vital win in Newcastle United's season so far. In what's been a fairly smooth sailing season on Tyneside with Chris Hughton and Colin Calderwood doing a very good job, Andy Carroll and his jaw-breaking scenario has caused some unwelcome bad vibes around the Toon. You wouldn't have thought that though when Andy Carroll latched onto Routledge's through ball to finish at the Keepmoat Stadium.

Newcastle United are no strangers to controversy and have one of England's most controversial characters on the books in Joey Barton. We needn't bring any memories back of the nightmare he caused to Newcastle and we're still not fully convinced that he's changed for the 3rd time now.

Next up for Newcastle are Nottingham Forest which, should we win, could pretty much seal our fate and indeed Forest's. Chris Hughton has today called on a 52,000 sell-out at St.James’ and I'm happy enough to say that I'll be part of what'll be a great crowd on Monday night.

Three points against Billy Davies’ side would all but ensure we'll be a Premier League team next season, with us only needing 4 more wins to secure definite Premier League football next term.

The excitement will be building on Tyneside but I'd like to think that we're entering the Premier League (if all goes to plan) on a modest note and really, we'll be facing a relegation scrap if we keep the current squad we have.

Nicky Butt has not the legs for another Premier League campaign, Kevin Nolan will have to convince me and whether new boys Mike Williamson, Wayne Routledge and Leon Best can make the step up to the ultimate footballing division in England, is still unknown. There's only one way to see though!

That said, the lack of comments from the Newcastle hierarchy regards the Andy Carroll bust-up is good for us because the media are running out of fuel to power their stories. Needless to say, we haven't heard the end of this though, far from it.