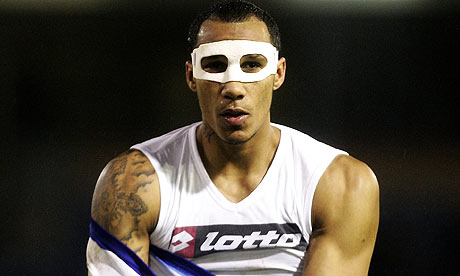 There are reports flying about the place in the last couple of days that Fitz Hall could be arriving on Tyneside on a permanent basis once the transfer window reopens. The defender, on-loan from Queens Park Rangers has seen a turbulent time at Loftus Road and indeed has seen the club dig their way through more than 3 managers this season. Their current manager in Neil Warnock could well have very different plans for the back four he wants next season and indeed Hall may not be included in them.

Officially a Premier League team now, I'm not quite sure what we'd be buying Fitz Hall for. Once very highly touted, he's getting on and we're not too badly stuck for defenders now. The likes of Mike Williamson, Fabricio Coloccini, Danny Simpson, Ryan Taylor, Tamas Kadar, Jose Enrique, and Steven Taylor are all on the look-out for a first team spot come August.

However, the Chronicle are reporting that Mike Ashley, who watched Newcastle United Under-18's unfortunately crash out t0 Aston Villa on Friday, held talks with Chris Hughton over the upcoming Premier League campaign and indeed potential transfer targets. It's understood Fitz Hall was mentioned in this meeting.

Then again, who knows? Hall himself has kept it no secret that he's loving life on Tyneside and would love to stay though. Speaking to the media, he said :

‘My views haven't changed from when I first came here,’

‘I came here on the basis of I wanted to get some games under my belt at a massive club like Newcastle and see where it takes me.

‘It's a massive club and anyone if they had a chance to sign for Newcastle, they would be stupid to turn it down.

At the end of the day, his contract is indeed at QPR but I wouldn't think it'd take much to prize him away from Loftus Road. Time will tell but do you think he'd be a wise acquisition by Chris Hughton & co.?