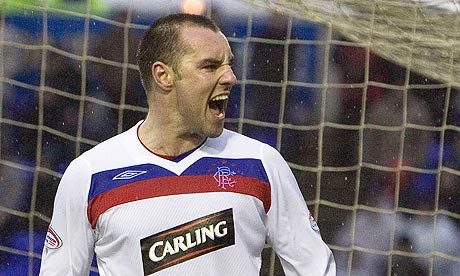 Growing reports over the last few days or so claim that Kris Boyd is keen on leaving Rangers - for Newcastle United. The Scottish International has signalled that he is indeed leaving Rangers this season and on a free transfer. Various clubs are in for the hitman however if rumours are to be believed, Boyd is keen on playing for Newcastle United in the Premier League in August. I think we realise at this stage that we have no money to spend this summer on any new players so we won't be expecting Jamie O'Hara, Hamit Altintop or Kevin Prince Boetang arriving on Tyneside any time soon, as if it was going to happen anyway.

However, if we can get a 26 year-old striker who is known for his goals albeit only in Scotland, for free , then snap the lad up - especially if he's eager to wear the Black and White Shirt. It's not often we encounter many players looking to play for Newcastle United without demanding too much money and I predict that Boyd wouldn't be on a huge wage should he arrive on Tyneside.

I'd be a big fan of bringing Boyd to Newcastle mainly because he's a free transfer, a decent striker who could nab a few goals in the Premier League and if his stint on Tyneside doesn't work out, we can ship him off to a Championship club or a Scottish team for profit.

We no longer have the choice of European cultured strikers or midfielders and must wheel and deal in players that can play football and want to play it for the club.

After all, it's all about staying up this season..