Should Newcastle United really be looking to sign Robbie Keane? 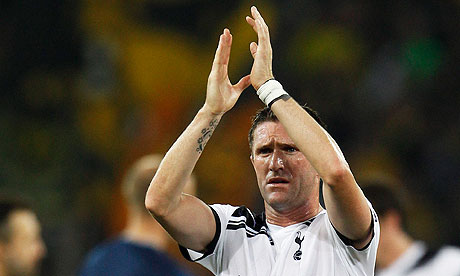 Keane - Can you see him playing his football at St.James’ Park this season?

Don't get me wrong, I'm all for it and think Robbie Keane would be a very addition to the Newcastle United squad. However, what I want to know - is whether you, the Geordie fans think that the Irishman would be a good signing by Chris Hughton and his team? I mean, Keane is 30 years of age and arguably past his peak. He'll look for high wages and for first team football . That's all good and well, but does that fit into the current ‘transfer plan’ put in place by Mike Ashley? Keane isn't under the age of 26, and will demand £45,000 a week at least, which is also beyond the supposed limit of £35,000 at Newcastle at the minute.

I've watched Keane since he first made his move to Tottenham. Believe it or not, he was extremely close to joining Sunderland before Spurs stepped in and stole him from them. He has been a consistent scorer wherever he has went and especially at Spurs. As an Irishman myself, I've witnessed Keane on the international stage for nearly 10 years.

He was the guy who helped us into the World Cup Finals in 2002 and was the man who scored than unforgettable last gasp equaliser against Germany in the group-stages, helping us progress to the last 16 without arguably our best player, if not the best midfielder in the world - Roy Keane.

What I can also tell you about Keane is that he tries to do things the hard way, and will scuff more chances then he'll score. At least for Ireland, we should've been clear at the top of our qualification group for this years World Cup, only for us to lose points in places where Keane had the chances to give us all three. That may seem harsh, but if you're from Ireland and have watched him too, you'll find it hard to disagree.

Saying that, when he does hit form, he can be the finest striker in the land. In fact, Robbie Keane last season, scored four goals in one match in a five nil win over Burnley, quite a feat for someone who had just returned from being a total flop at Liverpool, a £16m flop mind, and I think he could score a few goals for the Magpies too.

That poses the question though. Where do Leon Best, Peter Lovenkrands, Shola Ameobi, Nile Ranger all fit in? I can only imagine Robbie Keane would start otherwise his loan move would be pretty pointless. Himself and Andy Carroll up front could be a very good pairing indeed, reminiscent of Niall Quinn and Keane back in 2002 - a method that proved so successful indeed.

Now, of course all this is pure speculation but growing speculation at that. Chris Hughton today said he had a good relationship with Keane from working at Tottenham, and didn't rule out the possibility of him arriving. On the otherhand however, Redknapp said Keane is very much in his plans this season even with Defoe, Crouch, Pavlyuchenko and possibly even Luis Fabiano to contend with. if I'm being honest, I can't see Robbie Keane playing for us this season, because if he did happen to leave Spurs, it'd only be on a permanent deal and I think it's fair to say we won't splash £7-9m on him, being 30 years-old and everything.

Anyway, I wouldn't mind seeing him line out for us if a suitable deal could be a got, a loan deal, paying 30% of his wages and I certainly think he could offer Newcastle United a few goals. What do you guys think?