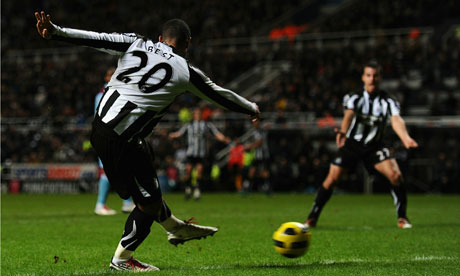 Best - Should be available for the tie against Stevenage this evening

It's that time of the year again when the FA Cup dominates the scene. Newcastle United are away to Stevenage at 5.30 and it is live on TV, which is a bit of a novelty in FA Cup ties nowadays. However, it won't be an easy feat against the League 2 outfit, if we give them too much respect. Alan Pardew may well rest Cheik Tioté, Leon Best, Jose Enrique and maybe even Jonas Gutierrez, and with Stevenage desperate for a FA Cup shock it could be quite a potent combination. I think Stevenage will try come all at us in the first fifteen minutes and if we can get the early goal, then we'll wreck their match-plan and it could be a rout. However, you really never know and the Cup always produces something a little magic.

It's a big day for Stevenage as a club and indeed a big day for Alan Pardew, as he hopes to bring Newcastle United as far in the cup as he can. There are reports on Twitter that Mike Ashley will be in the stands today, but we'll just have to see.

We're not sure what the lineups are but Tyne Time would like to see this 11 start today:

That 11 would be enough to beat the League 2 outfit you would think but Pardew's starting line-up might differ hugely from that.

Harper won't be available due to his wife being heavily pregnant, and the best of the luck to him there.

Whether we'll risk some of our important players we'll just have to see, but we are going there to win. There's not much point doing anything else.