There comes a time in football when realism must prevail 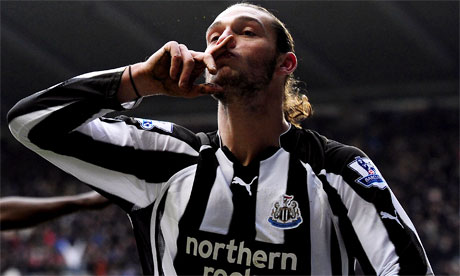 Carroll - Off to Anfield whether pushed or shoved out of St. James’ Park

irst things first; yesterdays deadline window was no doubt the most enthralling transfer window I have ever followed, but Sky Sports really did over-do the whole thing. Every 5 minutes they popped back to David Craig outside St.James’ Park and he seemed to have a new story, or something a little different each time. If it wasn't that, they were in Liverpool trying to get the latest on the Fernando Torres deal from their correspondent, amidst overly-excited LFC fans. With that said, the transfer window slammed shut at 11pm, with Torres heading to Chelsea in a whopper deal of around £50m, and indeed as we know; Andy Carroll moving to Anfield as the most expensive British player of all time. What we can take from this transfer window is not only do TV channels and others see it as a huge commercial opportunity, but in general, football has gone wrong - very wrong.

The fees being paid for players has really hit a point where something has to be done about it. Of course football players’ agents do brilliantly every time their client makes a big money move to another club, but it really is ridiculous at this stage. We only have to look at Andy Carroll's price tag: in excess of £35m. If reports are true, this figure will hit over £40m when Big Andy plays over 50 times and scores a certain amount of goals in his career at Anfield.

£35m is what they have paid for a young, very talented forward who in time, can become one of the top #9's in the world, yes - the world. If Carroll can play like he has played for Newcastle United this season and last, then he will justify that hefty price-tag. he has a good ten years of football left in him, and will no doubt achieve a lot in all those years.

With that said, this is more than a gamble. We are talking half the price of Ronaldo; more expensive than Tevez, Berbatov, David Villa, Hernan Crespo, and even Edin Dzeko. It is a lot of money to spend on one player, and he could well fail to live to the pressures of wearing the number nine shirt at Anfield.

It's a gamble paying that amount of cash for a young lad, but I expect he will justify his price-tag in time to come, even though I don't really care too much if he doesn't.

I know most Newcastle United fans are devastated and shocked that we've lost our best player, a striker that has come through the ranks at NUFC, and has worn the coveted number 9 shirt - but we have got a lot more money than what I expect him to be worth this time next year. There comes a time where you must put your footballing heart aside, and consider the financial aspects of the game. We have never in the history of our club received a bid of that amount, mind, never in the history of British game has there been a bid of that magnitude for an English player.

I think when the dust settles, and things calm down we will see Andy Carroll controversial transfer to Liverpool in a clearer light.

For once I think I do actually believe the clubs account on the transfer, and that Andy looked to leave, without causing too much of stir to his own profile.

Look at it this way; you're a talented young man, on £30,000 a week, a local hero in the making even. Liverpool come looking for you, and offer nearly three times your wages, and a nice signing on bonus. You don't want to disappoint the Toon faithful turning your back on them, so you have to leave on a note that won't upset your supporters.

How would you do this?

There's only one way really, and that's by getting the fans on the clubs back. I suspect, and these are only guesses mind, that Andy Carroll looked for a new contract which would make him the highest paid player at the club, but knowing that the club wouldn't budge on its wage structure, it gave him an easy excuse to leave. It also left him looking slightly better at the end of the tussle between the board, NUFC and LFC too.

Following that, this is what Andy had to say today on his move to Liverpool:

Liverpool is a big club which is going places and this is a chance to show what I can do. What I did at Newcastle has got me here and now I have to carry it on with Liverpool.

Interesting to see he says nothing about Newcastle United in his interview, although I haven't quoted the whole conversation.

The main thing is, we have sold Andy Carroll, he's now wearing the number nine for Liverpool, and we have got an outstanding amount of money for him.

We'll avoid relegation - I have no doubt about that. We have fared decently without Carroll since our FA Cup exit quite a while ago, and I have no doubt his departure will give some of our other strikers the boost they needed.

Over £35m makes good financial sense and really, as die-hard of a fan as you might be, we've been far from screwed in this deal. A Liverpool panic buy, which sees us bank a record fee which hopefully, hopefully will be reinvested in the summer on young talents.