Newcastle United have the quality to beat Birmingham tonight 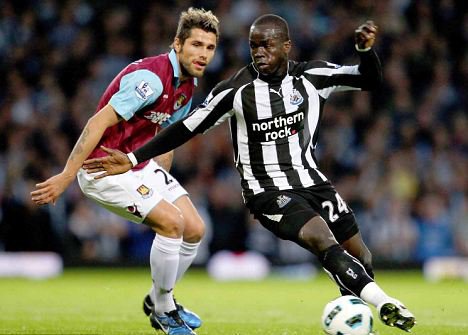 All the talk ahead of tonight's match between Birmingham City and Newcastle United is the about the upcoming battle between Nikola Žigic and our very own Mike Williamson. Žigic is 6'8 whilst Mike stands at a modest 6'4. There's little doubt that Birmingham will try pick out their big man on every occasion tonight and it will be up to us to stop him. However, last weeks last gasp goal from Žigic against Stoke will have the guys confidence sky high, and he'll be fancying his chances of grabbing what will be his sixth goal for Birmingham City this season.

Obviously Sebastian Larsson will line-up against the club he was strongly linked with a January move to, and he will be one of their most dangerous if you ask me. His ability from dead ball situations is really frightening. Most of Birmingham's goals this season, that I have saw at least, have been from set-pieces.

We have to be extremely careful not to give away any fouls just outside our own box, or the Swede will threaten.

Indeed a set-piece could decide this match, as we haven't been too bad ourselves from corners and the likes.

It will be a tough battle to get beyond Birmingham's back 4, with two strong centre-backs who also know how to score a goal or two.

As well as all this; Obafemi Martins is expected to make an appearance against the club he was relegated with in 2009 at Villa Park, it's coincidental that we so happened to be relegated in Birmingham, at Villa Park on that dark dark day.

Things have improved since then, and we are a Premier League team again. The last time we visited St.Andrews we were looking to secure Premier League safety under Kevin Keegan, now we're looking for the exact same thing with Mr.Alan Pardew at the helm and a totally different team. At least I think that's the last time we played them competitively anyway. Wasn't it the game Obafemi Martins actually sulked off the pitched after Kevin decided to substitute him?

Anyway, as my title suggests: we do have the quality to win this game and I think we can take all three points.

Cheik Tiote will hopefully be another rock in midfield with Joey, and with Jose at fullback supplying Jonas on the wing - I think we can score a goal or two, something we couldn't manage against Blackburn at Ewood Park on Saturday.

Saying that, Cheik needs to keep his discipline or we could be in trouble. He is picking up yellow cards all the time, and even though there have been ammendments to the law regarding the set amount of yellow cards you can receive before suspension - he still needs to be smart tonight.

If we can manage to let Tiote do his job alongside Barton then we really could boss the midfield tonight.

Then all we need is our strikers to score - with Leon Best hopefully getting a couple of chances tonight and sticking one of them away.

Nile Ranger will also make an appearance I suspect, and we here at Tyne Time think that his first goal for the club could come tonight, or indeed in the next couple of games.

Alan Pardew has said that the next three games will determine Newcastle United’ season; let's start with a win away to Birmingham and confirm NUFC's status as a 2011/12 Premier League team.