Fabricio Coloccini has been an absolute steal for £10.5m from Deportivo La Coruna 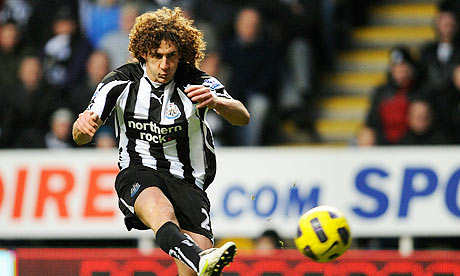 I think we all remember Fabricio Coloccini's first season in the Premier League. Lack of pace, and prone to many a blunder. Some of us asked ourselves if he was really worth the £10.5m Kevin Keegan paid over, if in fact he was Kevin's choice at all.

Following relegation, Coloccini did not leave and it seemed as if no one was going to take a gamble on the Argentinian international after what was nothing short of a disastrous first season in English football. Thankfully he did indeed stay on Tyneside, because he is for me at least, the best CB we have, and possible the best centre-half we have had in quite some time.

I highlighted his performance in our 1-1 draw away to Sunderland as one of the best I've ever seen from a CB in a Newcastle shirt in the last 5 or 6 years. He was composed, and as far as I remember did not put one foot wrong, quite literally.

Unfortunately, some of the gloss was taken off his performance thanks for one of the flukiest goals scored in a Wear-Tyne derby, spored by Asamoah Gyan's knee.

Of course a lot of the focus has been on how good Cheik Tioté has been this season, alongside joey Barton, Kevin Nolan and rightly so. Those guys have been the heart of what has been a successful season, and credit to Andy Carroll too who scored some very important goals during his time here this season.

Fabricio has scored a couple of goals this season too, some which have been very important such as his last minute equaliser against Wigan Athletic at home earlier this season. How Wigan wish they had kept him out for the three points now I bet!

He has also lined out over thirty times this season, which a great record. Mind you, his first season when he arrived, I'm not sure he missed more than a couple of games - I could be wrong though.

As my title suggests, I feel as if we have got a great deal on Colo - £10.5m for a proven centre-back, both in Spain and now in the arguably the toughest league in the world; the Premier League. If you look at what money Joleon Lescott and other defenders went for, and are going for - then you would realise that £10m is a very decent price - if it's only for the entertainment of his hairstyle!

Against Chelsea on Sunday he was solid, as was his partner Steven Taylor - and Colo seems to have developed a very good understanding with Mike Williamson who happened to have broken a bone in his hand, which allowed Steven back into the fray. Add that to the fact we have a few young lads coming through in the shape of Stevie Folan, and even the modestly aged Tamas Kadar. The future looks bright for our defence, or we certainly hope so.

Here's hoping to a good end to the season, and let's get 3 points to officially confirm that we are the best team in the North-East!