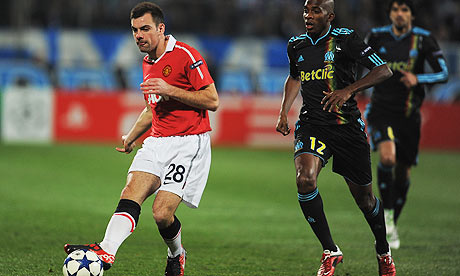 In the last couple of days, Irish midfielder Darron Gibson has been strongly linked with a move away from Manchester United and more noticeably to the Stadium of Light to join an already meagre midfield setup. However, as I mentioned in articles before this; Newcastle United and SAFC seem to share an awful lot of similar targets and are inevitably linked with the same players, over and over again. However , Gibson was a new target that had been identified, after it was made pretty clear that he was no longer needed at Old Trafford - with a £5m price tag on his head. Apparently Alan Pardew is not trying to hijack a move for the international and lure him to Newcastle United, with a little help from his old mate Danny Simpson.

I can't really see why we want Gibson; he's quite slow and inept at times on the pitch - something we can't afford to be in our second season in the Premier League since relegation. With that said, he has great ability shooting from distance and I have a lot of respect for the guy, considering he tried his utmost to keep Newcastle United in the Premier League with a thunderbolt against Hull City in the KC Stadium. Unfortunately it was another Irishman that saw us relegated, a certain Damien Duff.

Some people are suggesting that he is a perfect replacement for the departed Kevin Nolan - what absolute nonsense. In no way is Gibson a similar player to our former captain at all.

With Tioté, Cabaye, Ben Arfa, Barton & Jonas: there's no place in the team for Darron Gibson and he's worth nowhere in the region of £5m, in my opinion at least. Fair enough he plays for Manchester United, and some might argue that £5m for a guy who has medals that any footballer in the world would be proud of, five big ones is pretty decent value. However, he doesn't really feature for his country, which goes against him in a situation like this. He probably should though, he'd be much better than Keith Andrews.

Blaise Matuidi is a player Newcastle United should be looking at, and according to many sources including Sky Sports News: Graham Carr and co. are doing exactly that. Perhaps Gibson is a back-up plan should we not acquire another guy from France.

With all that said: I'm sure a lot of fans would be delighted if he arrives at St.James’ Park, and could well be a big hit on Tyneside but it's not a risk I'd be willing to take, and certainly hope that NUFC are of the same opinion.

Add to the fact we need strikers, and a couple of them. We are not short of midfielders Mr.Ashley.