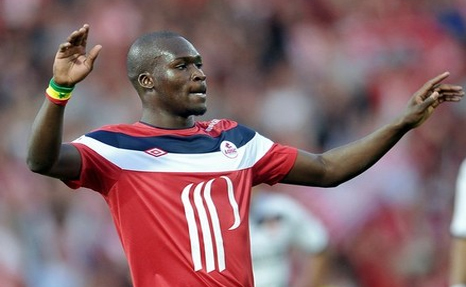 Having already failed with Gevinho and Kevin Gameiro; Alan Pardew has reportedly stepped up interest in Lille's Moussa Sow. For some of you that might not know So(w), he finished top scorer in Ligue 1 in France last season, notching up 25 goals, with a certain Kevin Gameiro just below him on the charts with a very impressive 22 goals for FC Lorient. Before any Newcastle United supporters begin to get excited I think there's very little chance of us landing him, or even getting to talk to him - especially after his teammate Gervinho preferred a move to Arsenal instead of St.James’ & indeed Gameiro also snubbed the Premier League to join Paris St.Germain. Add that to the fact that PSG's Mevlut Erding who seemed on his way out of Paris after Gameiro's arrival also looks like he may stay in France and challenge for a starting role.

We need a striker, or even a couple. So far we've got Demba Ba, Shola Ameobi, Leon Best, Nile Ranger, Peter Lovenkrands, Phil Airey on the books, with the likelihood that a couple of those guys may not be at the club come the start of the season; apart from our new signing Demba Ba of course.

TalkSport are reporting that both ourselves and Arsenal are keeping tabs on the Frenchman and that official bids could be lodged very soon. With that said, it's not much of a surprise for us, because we were linked with the lad back in the Christmas period. It's also not much of a shock to see us being associated with another French player either.

As the headline suggests: we are keeping tabs on him but I somehow think we will be only do exactly that. I can see us enquiring, and being scared away by his price tag and indeed turning our attentions to someone else, from France of course.

If we are stupid enough to start the Premier League season without another new striker then we could always chance playing Hatem Ben Arfa in an advanced role, perhaps in a staggered forward line - although I'd be quite confident that we'll have him somewhere in the region regardless of what strikers we may sign.

Time will only tell of course, but it will remain interesting for sure.