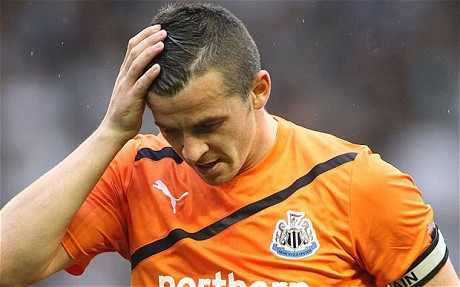 Questions - Who will be at Newcastle United and who'll be gone come Aug 31st?

Seemingly the drama surrounding Joey Barton, Twitter and the board and indeed Jose Enrique's ‘impending’ move to Liverpool is somewhat putting our transfer exploits on the back-burner - for the media at least. Today we found out that there have been talks with Tranquillo Barnetta and NUFC and that those very talks were going quite well - only for the Swiss to suffer an injury that could postpone the move to January or indeed permanently. However, for one reason or another, this news isn't anywhere near as talked about as Joey's relationship with the hierarchy, or as mentioned earlier - Enrique's imminent move to Merseyside. All in all, it could be a very good thing and we might get a couple of good players through the door without too much fuss, speculation or ‘drama’. It is a big ‘IF’ however.

Since the start of the Mike Ashley era we've seen drastic changes at the club. We have went through managers like it's a race to see how many we could reel in and throw out (regardless of success) and indeed suffered relegation, for the first time in nearly two decades.

There has been an end to the ‘big stars’ we were renowned for signing towards the end of the transfer window on big money - like Michael Owen, Damien Duff, Albert Luque so on and so forth. However, that hasn't been a bad thing at all.

In what has been a terrible few years under Mike Ashley's tenure we have learned as fans to expect anything, and everything. That was proven over and over again - with Chris Hughton's dismissal possibly going down as one of the worst decisions made in the history of Newcastle United FC. However, there is one thing we can expect as supporters of this great club - we shouldn't expect anything when it comes to transfer windows.

As we all brace ourselves for the remaining 26 days or so - you have to be realistic and prepare for the worst. The worst being Joey Barton, Jose Enrique, Nile Ranger and maybe a couple others leaving, with no one lined up as replacements and the inevitable happens: time runs out.

I have come to accept that the most we'll sign between now and August 31st is two players - if we're that lucky.

We have been crying out for a real striker since Alan Shearer hung up his boots and since Big Andy left for pastures new - we have been scarily short on a commanding striker up top. We've Demba Ba, Leon Best, Peter Lovenkrands, Shola Ameobi, Nile Ranger - but we need one more.

We need someone who will be first down on the team-sheet for every fixture. I honestly don't think there's anyone in that list above that have a concrete place up-front - unless we're playing Sunderland of course.

The talk of Mevlut Erding arriving has disappeared - perhaps work is still being done on that deal but I somehow doubt it.

News from Reading today confirms that there has been no bids from any Premier League side so we obviously havn't offered anything, as strenuously reported in weeks gone by. More sources say we're looking into Jermain Beckford - I doubt that very much.

There's no chance we're landing either Peter Crouch or Defoe as well - and thankfully so. They aren't the type of guys we need at St.James’ Park. We're enquiring 5 years too late Alan - if we have enquired at all.

So what will the real scenario be come August 31st? If I'm to stick my neck out on the line - I think we'll sign one more player - a striker but someone we won't have expected (whether that will be a good thing or not, we'll just have to see).

I also believe Joey Barton will be here by the end of the window if he gets his way - but I don't think his Spaniard friend will be lining out in Black and White much longer.

All in all - don't be getting to excited with the remaining few weeks. Apparently the guys are working hard behind the scenes on incoming transfers - actions speak louder than words fellas. I expect we'll still have a void in the team and a big one comes midnight but the same old excuses will appear in the morning papers. ‘We worked through the night and just couldn't push through deals in time’ - ‘We didn't expect clubs to respond with such staggering asking prices - it wouldn't have made financial sense to accept them’

I certainly hope I'm proven 100% wrong, but in the words of Joey Barton's mate George Orwell:

‘If liberty means anything at all, it means the right to tell people what they do not want to hear.’

Whatever that all means eh? 😀