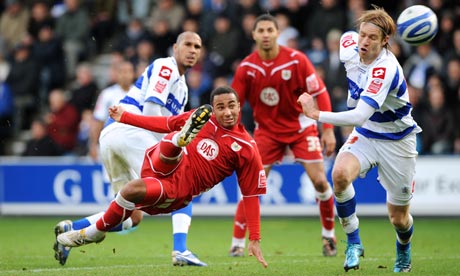 There's some interesting news regarding our search for a striker; and that Alan Pardew may have turned his attention to Bristol City's main man - Nicky Maynard. The striker is 24 years of age, fitting our age category for recruitments and is out of contract at the end of this forthcoming season - meaning he could be obtained for a half decent price. With Modibo Maiga begging Sochaux or rather demanding that the club let him join Newcastle, perhaps Maynard is a last resort if we don't happen to lure anyone to St.James’ Park in the next few days. I'm a big fan of Maynard and you'll know that if you go back into my archives of articles. He's a talented forward, quick and a sharp shooter - or certainly was when I last saw him. He is a goalscorer and City dished out £2.25m for his signature a couple of years ago. If we could pick him up for that price or even less, he's well worth a shot.

Now I'm not saying he could well become our new number 9, but he's a different type player to Shola Ameobi or Demba Ba. From what I've seen on him in action, he's sits on the back four ready to be played in: it's not often Ameobi attempts to do that, and when he does, the forth official usually has his flag up.

Modibo Maiga, Nicklas Bendtner, Shane Long, Peter Crouch, Jermaine Defoe have all been linked with us in the last couple of weeks and as we know from that list: the Irishman has since joined Roy Hodgson at West Brom - and scored on his debut vs. Manchester United.

Arsenal's Danish forward is wanting out but with a £11m price tag, and quite high wages it's unlikely that we'll see him dawn a Black and White jersey this season.

It's been widely reported that we have bid £7m for both Pieters who is expected to sign in the coming days, and indeed £7m for the Malian centre forward meaning that should we have our way with both of those targets: we'll have spent about £15m in one go, and about £20m or so for the entire summer transfer window which isn't bad at all.

However, the fee for Pieters is just Enrique's cash being reinvested and the other £7m is a fifth of Andy Carroll's record transfer fee to Liverpool. Either way, providing we get a striker or two, and a left back or two - I think we've done quite shrewd business this year.

We expect another £10m or so to be added to that figure, bringing it to over £20m expenditure.

Of course if you do the maths you see that we have profited well, close to £30m in profit with a LB and a striker included.

Indeed we have lost Andy, Jose and Kevin - but with time, we can build this side back up and if Joey stays; we can rebuild the famous dressing-room spirit that helped us gain promotion and indeed finish 12th last year.

As for Nicky Maynard - thoughts? Good signing if we snatch him?