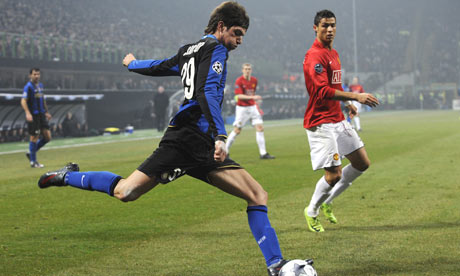 There are emerging reports suggesting that Newcastle United are in advanced talks with Inter Milan's Davide Santon over a move to St.James’ Park. I think most people will know Santon and also be aware of the talent he is. He was very much a wonderkid in the making a couple of years ago but for one reason or another - the Italian side may be willing to let the 20 year-old depart the San Siro. Deals for Erik Pieters, Aly Cissokho and even Wayne Bridge have been mooted over the last couple of weeks with the Dutchman looking increasingly likely to pull on the Black and White of Newcastle United this season if NUFC can sort out an appropriate fee with PSV.

As we know; Santon is a full-back and can play either side if need be. He's quite fast and with some coaching and tutoring he could be a right talent to behold in the Premier League - but that's just my opinion.

£10m has been the quoted fee for the Italian which in some ways could bring this story to a halt. Would Mike Ashley, or the Mike Ashley we know really splash out double figures for a 20 year-old who he more than likely has never heard of? I doubt it, and strongly at that.

Saying that; £10m seems a little high; it's about €11m - a couple of million less looks a bit more realistic to be fair.

It's encouraging to see us being linked with the likes of Santon and also Nolan Roux of Brest who would be a fine addition to the squad should we meet his release clause. Bare in mind that we could very easily have signed NO left-back or NO striker come the deadline with a lot of the usual excuses. If that happens again; then it's unacceptable.

I know that many clubs delay their stance on an offer from another club for as long as they can to both try attract competition for the player, and indeed hike the price up. It's wrong; but it happens.

The one thing with NUFC, and Mike Ashley; the club won't be held ransom to any player and won't pay over the odds - that's a fact.

It will be interesting to see how things develop in the coming days but I certainly hope Barton ends up staying at NUFC, we get Santon & Pieters and also manage to get one of Nolan Roux/Modibo Maiga.

Too much to ask? Probably.