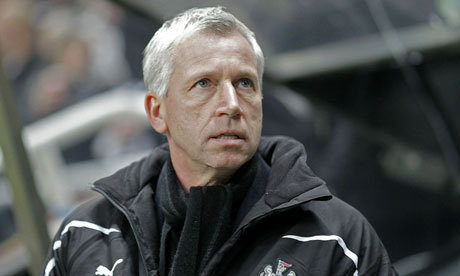 Pardew - Clock is ticking as NUFC desperately try to lure to players to St. James’

It was always going to come down to the final couple of days wasn't it? A whole summer was spent trying to find a new club for Joey Barton, get the best possible price for Jose Enrique and relocate Kevin Nolan. The whole summer is nearly gone; and we're still crying out for a striker, and a left-back. Why on earth you wouldn't have a full-back acquired before Jose departed for Merseyside is beyond me - ridiculously inept from the board. With the move for Erik Pieters blocked by the PSV board, Newcastle have had to move elsewhere and pretty quickly. Luckily enough; Aly Cissokho is eager to come and if reports are to be understood - he could be on Tyneside very soon. Then again, our supposed move to Davide Santon may well question whether the Lyon full-back will arrive at all. Only the next couple of days can tell us I suppose.

Why we've left it so long baffles me. The longer we leave it; the more we'll pay - or possibly in our case: the more we won't pay.

Lee Charnley are Derek Llambias are working closely together to get deals done, or so we are led to believe by Alan Pardew - who compiled his wish list with the help of Graham Carr. However, why aren't these deals done already? The transfer market has changed in recent years; sometimes you have to pay that little bit more to get who you want. Do NUFC realise this?

A left-back is imperative for our season, Ryan Taylor cannot play there for the rest of the campaign. Davide Santon on the other hand would be well able to fill that role - despite his young age and lack of experience in English football. Afterall, there is only one way to gain experience and you guessed it, it's by playing regularly. Signing the Italian as we mentioned in our last article would be a real statement of intent. He has a lot of potential and is versatile which is always a bonus, unfortunately just not for James Perch.

With no business being done today at the time of writing this article, it means we have about two days to get two players or more.

When is the last time we've done that does anyone know?

Sulley Muntari is apparently on his way to St.James’ in a loan-deal as a replacement for Joey Barton, but to be honest I know which one I'd rather have kept.

I'll leave that one to you.