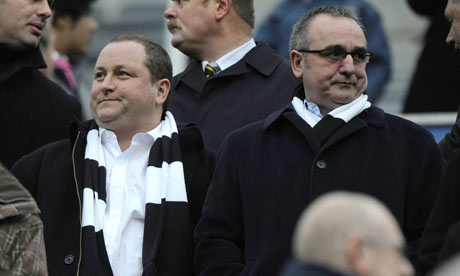 When the window slammed shut at 11PM on Thursday night most Newcastle United fans were disappointed, tired, and angered that we hadn't managed to recruit a new striker with £40m plus in our back-pockets and with over 8 months to do it. Of course we got Demba Ba in early on in the season - because he was a free transfer, looked for modest wages and wasn't incredibly old. The day before the window closed; we recruited a talented Davide Santon from Inter Milan on a 5 year deal indeed a deal which impressed a lot of supporters including myself. However, if you're in any half sensible you would have expected what was to come, rather: what wasn't to come.

We rivaled Fulham with an eleventh hour bid for FC Twente's Bryan Ruiz, supposedly offering a better financial package and even had a helicopter on site ready to escort the South American to St.James’ before Martin Jol could complete the coup. Nonsense. I'd be very surprised if there was any helicopter ready to go to Battersea - never mind us offering a better ‘financial package’. Don't be fooled.

I for one was not one bit surprised that we didn't manage to strike a deal for another CF before the window closed. Negotiations with Sochaux were tiring, and heading nowhere - NUFC weren't willing to pay the premium price for the Malian and as you know - he'll continue with the Ligue 1 side this season. We also considered making an offer for Nolan Roux who has a €8m release clause: that never materialised either.

A last ditch bid for Liam Ridgewell to compensate for a nearly departed Danny Simpson was lodged. Nile Ranger was also part of that deal which would have seen him join-up with former NUFC legend Chris Hughton. I'm quite happy we've managed to keep hold of Ranger - give him the chance up front and let's see what he can do. With that said - Liam Ridgewell? A typical knee-jerk reaction for the board, that was until their bid was rejected of course.

Then to top things off, a certain Derek Llambias released a statement explaining their summer business. I've picked out a few lines which I'll look at and explain it's real meaning.

Of course we had also hoped to secure a further striker in the window, in addition to Demba Ba. Work to bring a striker into the club began early in the summer. Negotiations were complex and protracted and unfortunately it was disappointing that ultimately we could not secure our priority target.

Negotiations weren't favouring Derek Llambias or Mike. The figures being quoted were seemingly too high for the board and the guys thought that the respective club was overvaluing it's key striker. Andy Carroll anyone?

The problem with Llambias, Ashley and some of their mates is that they don't understand the way football works. They don't understand investment in the game. Mike would see splashing £10m on a good centre-forward like acquiring a new company (‘Cruise Clothing’) to add to his portfolio. Mind you; that decision angered share-holders massively. There is no possible way Mike would pay anything over £10m for a young striker that he hasn't heard of - despite that fact that the money belongs to the club and not him.

We understand that supporters will feel frustrated that we did not sign another striker during the window, but it was not for lack of trying that we did not bring our final target in.

That might be true but it was certainly the lack of knowledge of the market that let him down in the end. My guess would be that DL expected Sochaux to accept their ‘generous offer’ (which was a couple of million below the asking price) and get on with business. Since the French side had the right idea in keeping their star man - they refrained from accepting anything else other than what they wanted for him. Sound familiar?

In modern football -you just have to pay that extra million or two to get your man in the door, Kenny Daglish will tell you all about it.

Our owners and top men don't believe in that - proven in the capture of Sylvain Marveaux, Mehdi Abeid, & Demba Ba - all on free transfers. Now I'm not complaining one bit because their good signings for nothing but would we have recruited these guys if they weren't free agents? I don't think so. In fact - I know so.

The signing of Yohan Cabaye is another good find by Graham Carr. Acquired from Lille for £4.3m is pretty shrewd and devious business by NUFC but what else would you expect. Thankfully it looks as if we've got a real gem on our hands in Yohan and he's delighted to be at Newcastle which is always a bonus!

What frustrates me and indeed all NUFC fans is the fact we're being constantly lied to. The board think we believe what the publish - they expect that we'll get over it in time and forget about it, until there's another timely mini-disaster from Ashley and the lads.

These guys don't know football and shouldn't be running the club. Fair enough if you're good with money, but you have to spend in football or else you feel the effects.

What is occurring to me now more than ever is the fact that Ashley is using the club as a cheap form of advertising. Let's have a look at the opportunities for him and Sports Direct with NUFC:

1. Nearly on TV every weekend at St.James’ - billboard and advertisements around the pitch itself get air time from throw in's, corners and any other bit of action near the touchlines. It's convenient that a Sports Direct advert spins around there for the 90 minutes.

2. The dug-outs as you may have noticed are well decorated with Sports Direct logos too. The head rest on every seat of the bench as an embroidered wording of Sports Direct - and as you'll know, the dug-outs get a fair bit of air time too - from before KO, subs being made and the final whistle.

3. The famous ‘Newcastle United’ sign on the East End is being dismantled to be replaced with two adverts either side of the clubs name. I wonder what adverts those will be?.. That's even without mentioning the rather large the signage on some of the ends already.

4. When our Northern Rock deal expires in the coming years - don't be surprised to see a certain Sports Direct occupy that spot for future Premier League campaigns. However, that's if he still owns the club come the time.

Anyway, whilst he is owner we must support the lads on the pitch and hopefully keep up our good form. We'll be lied to on numerous occasions in the future for sure, personally can't wait to see in January what their excuses are for not signing a player or two. Until then, we'll look forward to our trip to QPR. A repeat of the last time we went there would be nice. Lovenkrands on target would be welcomed for sure.