Yohan Cabaye the lynchpin of the new-look Newcastle United 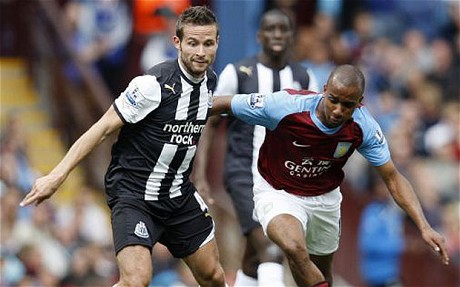 We may well look back at Saturday the 17th of September as the day Yohan Cabaye announced his arrival in the Premier League. The Frenchman played arguably his best ninety minutes in a Black and White shirt since his arrival and generally was sublime on the ball. It's just a pity that he didn't get his deserved goal on the day, the crossbar and a magnificent Shay Given save denying him two possible goals. For me and I'm sure a lot others; he was the best man on the pitch that day and started showing glimpses of the quality he possesses, indeed quality that helped Lille win the Ligue 1 last season.

Last night we didn't have Yohan on the pitch but another Tyneside favourite; Hatem Ben Arfa. The Frenchman was making his comeback following an ankle injuring whilst on tour in America. It was a breath of fresh air to see Hatem back playing football and showing his beaming technical ability - something we paid £5m for, while he was recovering from a broken leg. A gamble? Mike, Derek or Alan didn't think so.

With Cabaye in the centre with Cheik Tioté I'm quite excited by this pairing. Two quite different players but both wholly influential and full of quality. Mind you; both were acquired for £7.8m which is cracking business by the Newcastle United board, Graham Carr and co. It begs the question whether £15m has to be splashed out on a creative midfielder or even more than that, as we've seen happen.

Another guy who I was impressed with yesterday was a certain Sylvain Marveaux. I know it was only Nottingham Forest and we barely scraped by them but there's something about him that can unlock defenses. He can cross the ball as well, whilst also possessing a decent amount of pace. We can see why Liverpool wanted him, that's for sure.

It was good to progress in the Carling Cup last night and we're edging closer to the Quarter Finals all the time - wouldn't it be nice if we got a generous draw for the next round? Fat chance of that if I may say so myself.

It's not about the Cup for me though; it's about the new-look Newcastle United side we're building - it's an exciting time for NUFC. Our signings this summer are slowly but surely gelling together. All we need now is to get Demba Ba scoring and between himself and Leon Best - we'll keep our Champions League place until the end of the season 😀