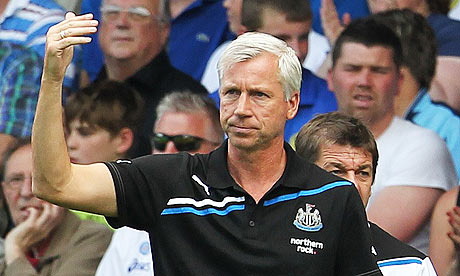 The fruitless long protracted talks with Sochaux over their prized forward Modibo Maiga in the summer may not have went down well on Tyneside, but news today from various sources including The Guardian claim that a deal has now been agreed between both parties and the Malian striker will pen a 4 and a half year deal at St.James’ Park on January 2nd. Graham Carr and his scouting team have been watching Maiga for quite a while now and our article just below this one has seemingly been reassured by the news today. A figure of £7m is enough to lure him to NUFC and if he has the potential that we think Carr and co. see in him; then I think we're in for a very exciting forward line-up to partner either Demba Ba or Leon Best.

The player tried forcing a move in the summer but ultimately failed as Newcastle United were unable to agree a deal. Funnily enough, after all that - he'll be holding a Black and White jersey in the first week of January: doesn't make a lot of sense.

Either way, we need a striker and seemingly we've got our number 1 target. A new #9? I highly doubt it - but if he can score goals and finds his potential at St.James’ Park then we're all happy.