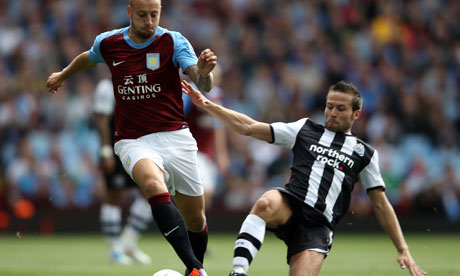 In an interesting read by Mark Douglas over at the Sunday Sun, revealed that Newcastle United's scouting team were keeping tabs on Yohan Cabaye, before signing him this summer. To  be honest, I find that slightly difficult to believe. If we date back five years from this very day, we're in the year 2006. Those were the years of Glenn Roeder, and the likes of Damien Duff, Obafemi Martins, Anotine Sibierski and so on. One of the positive impacts Mike Ashley has had on Newcastle United as a club has been the establishment of a very good youth setup. Proper coaches have been put in appropriate roles, and we are beginning to bear the early fruits of this hard work and investment. However, Ashley didn't take charge of NUFC until the spring of 2007. Begging the question - were Newcastle United scouts eyeing Cabaye even then? I doubt it.

In all fairness, our scouting network wasn't really sorted until Dennis Wise was removed from his position, and we stopped watching/judging players potential from YouTube videos. Graham Carr and Norman Wooster are the two main men in charge of player recruitment, with Alan Pardew working closely with the duo. Our knowledge of the French markets have seemingly been only bolstered in the last 24 months or so. That asks the question, who advised the signing of Cabaye? Was background research done on Cabaye who would have been 20 then, back in 2006? Or did the lads keep tabs on him from his early twenties onwards?

I assume it was the same with a certain Cheik Tioté as well - thorough research and inspection was carried out until all boxes had been ticked and £3.5m was splashed out on the African. However, I seriously question as to whether the staff back in Freddy Sheppard's time or even in the early days of Mike Ashley's tenure, really were monitoring the midfielder.

With all that said; it's great to see the shape our scouting network is in at the moment. We're working all the time on new players and according to the Sunday Sun's article - we're in contact with major agents, and their clientele.

It all bodes well for our future, and hopefully we'll continue to work hard on top prospects whilst getting value for money, like I'm sure we will.

Yohan Cabaye is just the tip of the iceberg of talent that we've our eyes on, and yesterday we got another glimpse as to why the NUFC scouting team did indeed spend so long monitoring his progress.

Here's his goal again for anyone who might have missed it, although somehow I doubt you did!