How much would you pay to bring Andy Carroll back to St.James’ Park? 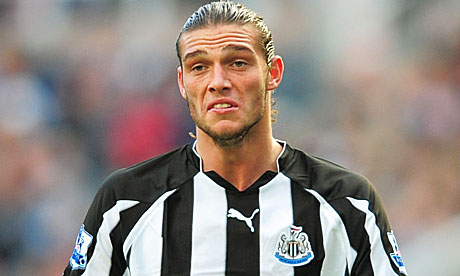 Carroll - What price would you pay to bring the Geordie back to Tyneside?

First of all, it’s not happening. Andy Carroll will not return to Newcastle United this January or even in the summer. Lazy journalism seems to have spurred on continuous rumours of a return for the £35m man; either on loan or permanently. I’m sure Andy himself would indeed welcome a move back to Tyneside in order to refind the form that saw the 6ft 2 striker become one of the most sought after English forwards of his decade. However, Liverpool wouldn’t allow it nor would a lot of Newcastle United supporters approve of a return of Andy. He left the club perhaps when we needed him most and a lot of supporters label him as a traitor. I wouldn’t go that far, because in hindsight, Newcastle United may well have made one of the best deals they’ll ever make.

We don’t miss Carroll up front, and the football we play now wouldn’t suit the big man anyway (our tactics away to Liverpool last week aside). Demba Ba signed on a free transfer after leaving West Ham and has notched 14 goals in the Premier League so far - more than Carroll had accumulated at this stage of the season last year, and you must remember that this is Demba’s first real season in the Premier League.

The buy of the season so far without doubt.

With all that said - the rumours will remain of Andy’s ‘imminent’ return to Newcastle United. Some supporters would welcome him back - to those who would: how much would you pay to resign the Gateshead born lad?

I can only imagine that his real value in todays market would be in the region of £10m, some might argue that he was only ever worth that before he joined Liverpool. The thing about it is, Newcastle United held all the aces. We knew Liverpool had a large chunk of money after selling Fernando Torres to Chelsea and also knew that Liverpool were desperate to land a replacement for the Spaniard.

People must remember however - as well documented as it is that Mike Ashley likes to make profit on players - he did reject an initial £30m bid, or in the words of Derek Llambias ‘slammed down the phone’ when the offer had been made.

If Liverpool weren’t to have increased their offer and Andy stayed at Newcastle United, what kind of picture would we be facing now?

Would Carroll have continued to score goals on a regular basis for NUFC? Or would he have fallen from the limelight and gained a reputation of ‘what might have been’?

Of course we don’t know how things would have fared out but Andy is a talented forward all the same - indeed one of the finest headers of the ball in the Premier League if not in Europe.

Liverpool haven’t given him the service he deserves or craves and instead want to build every movement through a certain Luis Suarez.

Carroll wasn’t worth £35m, and might never hold such a value ever again.

However, he can get you goals and I expect that he will make it at the highest level at some stage. Liverpool’s Kenny Dalglish has under-performed as much as Andy himself, and after all it was Kenny who eagerly lodged £35m into Newcastle United’s bank account on that cold January evening.

Once again, if the opportunity ever arose of Carroll returning to Newcastle United in the next year or so - how much of the £35m would you refund to LFC?

I'd be happy to take him back at anything up to 20 mil, we know what he can do and even if we paid the full 20 mil it would be like we recieved a 15m fee for allowing him to go on loan for a year!

Interesting theory! Worth £20m though? A talented striker indeed, but where would he fit in at the minute? A partner for Ba?

pete if ashley allowed 20 mill to be spent id rather it be on a few players rather than carroll. 5 maybe 10 is what i think however unrealistic it is

Most we should pay is £10 million the bin dippers was desperate to get him we are not.

You speak of "lazy journalism"? This article is littered with factual errors and what is left is based on the author's completely misguided opinion. Do you just type anything that comes into your head, love? In fact, you're so poor you leech off lazy journalism to produce your own brand of even lazier journalism... get a job, you bum.

Hi I'm a Liverpool fan and really want andy to be a success. I don't think he's had the opportunity to show what he can do at Liverpool just yet an I can see he's highly rated by the Toon Army. He was never worth 35 mil, but who is? I hope he stats with us and I feel that he'll start to show his worth if he does. Anyway good luck with the rest of your season.

£25. I know its not much but its all i can spare. please take him Nev the Red

Always love a compliment me.

Fully agree that he hasn't had the opportunity to show Liverpool what he can do, perhaps with Gerrard back in the team he'll start getting the service he needs - only time will tell. Cheers, same to ye!

TBH he was bought by a manager who currently has more money than sence and wanted Carroll to be a statement of intent. He was never worth £35m was he?? Ba was free so that kind of says it all really!!

Zero, zilch, zip, nada, nixi nowt! Pay us to have him back. MA won't 'buy' ac back, &amp; anyone with any business sense or any history of making any purchase whatsoever would never 'buy back' a 'thing' that the former purchaser was sooo keen to 'sell'. Howay!

Fuck off you Geordie jippppppo