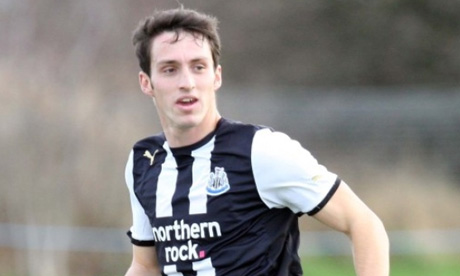 Newcastle United trialist Jason Prior has confirmed that he will not be signing for Newcastle United on a permanent deal following two weeks of training and participation with the reserve squad. The Bognor Regis striker was offered a remarkable opportunity to show NUFC staff his worth and despite scoring on his debut for the reserve squad with a well taken goal; Newcastle United have decided against signing the 23 year-old. However, it is believed that Rangers FC and a couple of other nPower Championship clubs are interested in taking him on and testing him out.

The striker thanked Newcastle United fans and staff for their support and best wishes:

‘Thanks for all the Geordie support over the last few weeks. Much appreciated! You never know might be back in a few yrs. Great experience!’

Hopefully we will see Prior return to St.James’ Park at some stage in the future, as he has plenty of years in the game ahead of him.

NUFC backroom staff did comment earlier last week that the forward does a future in football, but it might not be on Tyneside.

Best of luck to the lad!