Fans Special: Get your Papiss Cissé wallpaper for free!

It is hard not to sit back and relish Papiss Cisse's goal scoring form for Newcastle United at the minute - what ever club you support in the Premier League, bar the obvious. Arriving from Germany for £9m - a little more than a quarter of Andy Carroll's fee - he has already notched nine goals in eight games. For strikers landing in the Premier League from abroad, it is accepted that some take half a season to adjust to the pace of the division, and the physicality of the game. It certainly looks like Papiss settled the minute his plane touched down at Newcastle International Airport. A stunning goal on his debut against Aston Villa set the tone, quickly followed up by one at home to Wolves & Norwich. Immediately after, another six goals arrived in three matches - 2 against Liverpool, 2 away to West Brom and on Friday gone: a brace in Wales, against Swansea. It really doesn't get much better for someone hoping to fill the famous #9 jersey at St.James’ Park.

In fact, his form is so good we've decided to make a wallpaper to acknowledge it!

9 goals in 8 games doesn't go unnoticed, and certainly not when a guy is doing it in a Black and White shirt.

Papiss Cissé celebrating in the Black and White Stripes - there's no better sight than it!

It's basic and it's meant to be. 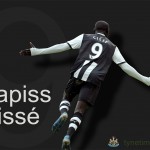 (If you've a pop-up blocked enabled, you won't see the full-sized wallpaper - instead, right-click and ‘Save As’)

The size is 1024x678 - the default size of most monitor display settings. However, if you want it resized to fit your own demands, just send us an email, or send us a Tweet over at our Twitter: TyneTime

Oh, and if you haven't read it already - take a look at my post over at FootballScores on our transfer policy under Mike Ashley.

It's an interest read, honest! 😀 Feedback, comments more than welcome too.