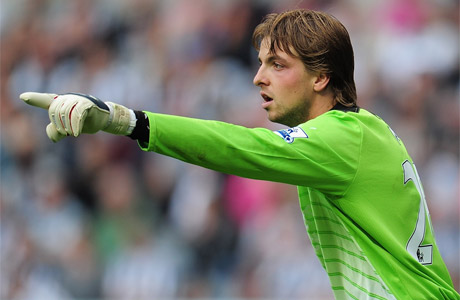 I'll never forget the first time I saw Tim Krul in ‘real’ action for the senior team - away to Palermo in what was then the UEFA Cup. We were leading 0-1 courtesy of Albert Luque in one of his few games for Newcastle United. The pressure began to increase and the shots started pouring in on the young Dutchman between the sticks, however, after a string of quality saves, NUFC held out for a valuable three points. Although with a back four including Titus Bramble and Peter Ramage, there's no wonder that the 18 year-old keeper had plenty of work on his plate. Fastforward to 2012, Krul is Newcastle United's #1 and hoping to start for The Netherlands at the EURO's. With him between the sticks and in his current form alongside RVP, Holland may well be a good contender for the tournament.

A decision was made in the summer of 2011 on who would be our first choice keeper for the Premier League campaign and youth was chosen ahead of the aging yet loyal, Steve Harper. Alan Pardew hasn't looked back since.

As Newcastle United record one of their best Premier League campaigns in almost a decade it comes as no surprise that Tim Krul - alongside our defenders - have been among the standout performers this season. In turn, Timmy has attracted interest from an array of clubs, with Chelsea showing a real interest in the 24 year-0ld.

Krul signed a new 5 year deal a few months ago, but as I'm sure we know by now, contracts are often not worth the paper they're written on. However, the one positive aspect of long term contracts is that a player's transfer fee increases significantly for anyone looking to acquire them. Certainly, this would be the case with Krul.

With that said, his rumoured selling price is £15m. If I ever heard nonsense - this is it. There's no chance Krul would go for a measily fee of £15m to a top club, especially considering his age, his potential and the fact he is probably the best keeper in the league at the minute.

With a 5 year contract just signed, having just turned 24 and with multiple international caps to his name, Krul for me at least warrants the guts of £25m. Goalkeepers do not come cheap nowadays, as they are an investment and can often last 10-15 years. Craig Gordon over the road would be a good example, he cost almost £10m and I think it's fair to say he's a decent stopper, but Tim is in a different bracket - although to be fair to Craig, injuries have stopped him from a real go at the Sunderland first team.

Anyway, without getting bogged down by potential fees or the likes, I want to know whether you think Krul would consider a move to Stamford Bridge?

I mean, we are above them in the league at the minute and all going well - we will finish above them while securing a European spot.

Petr Cech is currently their #1 at the minute and on his day - Cech is the best keeper in the world without a shadow of a doubt. That begs the question why Chelsea would be looking at Krul, and if the young Dutchman would even start should he make the move the London.

Krul is happy on Tyneside and enjoying his football. Somehow, I don't think he'd be too interested in joining the Blues any time soon.

What do you lot think? Would Tim switch allegiances that quickly?