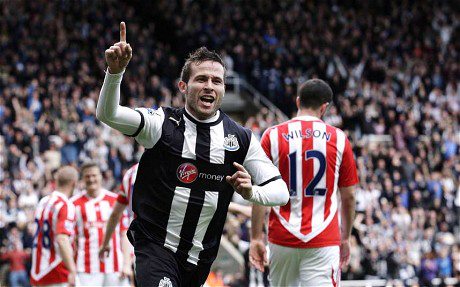 Yohan Cabaye today turned in his best performance in a Newcastle United jersey against Stoke City in a comfortable 3-0 win for the lads. Opening & closing the scoring, with a routine Papiss Cissé goal inbetween - Cabaye sent Newcastle United into 4th spot in the Premier League. It was all NUFC from the first whistle, and after 13 minutes a bit of brilliance from Ben Arfa out on the wing helped the ball into Cissé who hit the bar - only for Cabaye to follow-up and nod it in. Cabaye then played an exquisite through ball to Cissé who slotted it away into the bottom right hand corner, inevitably ending the tie. To top things off, just before the hour it was the signing from Lille yet again who popped up with a finesse finish to score his 5th of the season.

A great three points for Newcastle United and helped even further by Queens Park Rangers and their 1-0 victory over Spurs just a little while ago.

We now lay fourth in the league, three points ahead of Tottenham - and 3 points behind Arsenal with a game in hand.

Can we manage Champions League football? With four games left, it is firmly in our control.

In the meantime - here's the Premier League table:

And if you haven't seen them already - here's highlights of all the goals at SJP today, enjoy: