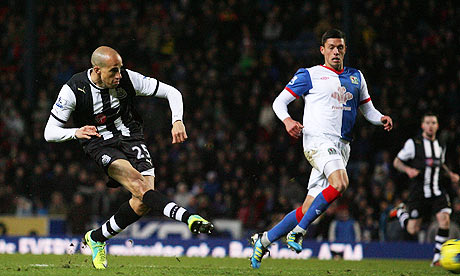 With Hatem Ben Arfa, Demba Ba and Papiss Cissé leading Newcastle United's attack in recent weeks it must make Gabriel Obertan's comeback from injury that bit harder. The winger signed from Manchester United for £3m played quite regularly at the start of the season, as Hatem gradually got back to full fitness. However, a few niggles and annoying injuries have kept Gabby out for a month or so, the sad thing being no one has really missed him. He is quite frustrating to watch at times, but Alan Pardew and John Carver have faith in his ability, and that is enough for me to indicate that he can be molded into a a very good winger.

Competition has never been harder for places in the NUFC starting 11 this season with an array of players on the bench ready to take the place of anyone under-performing. The likes of Danny Guthrie, Dan Gosling, Shola Ameobi, Mehdi Abeid, James Tavernier and Ryan Taylor all line the bench at the minute - finally we seem to have a little bit of depth to the squad.

You'd have to feel sorry for Obertan just a bit because, at the moment there's no chance Ben Arfa is being moved from the teamsheet. Since he has started games, Benny has been a man on a mission and arguably, has been the best winger in the league since the start of the year. Certainly the most skillful one anyway.

Whether Obertan can adapt to the left-wing naturally or not I'm not sure, but he may have more luck getting playing time on his return in that very position. Seemingly our new formation of the back four and two holding midfielders has brought new life to Jonas Gutierrez, he has been playing out of his skin all season. A much improved player is our Spiderman.

Of course Demba takes the left-wing role when Guti slots in beside Tioté in front of the defence, so it really is hard to find a position for Gabriel from the first whistle. Inevitably, he could be a very good impact sub for the last half hour, just like wor Shola is.

If subs appearances gets the best out of some of our fringe players then it's a no brainer - impact subs they'll be.

Gabby doesn't have the quality to start just yet, but in a couple of years time with the right coaching, he could be a very tasty winger as he has the height to cause problems and pace to burn; always a good combination.

What do you think? Where does the Frenchman fit in?