The last of Newcastle United’s ‘disappointing generation’ nears the door 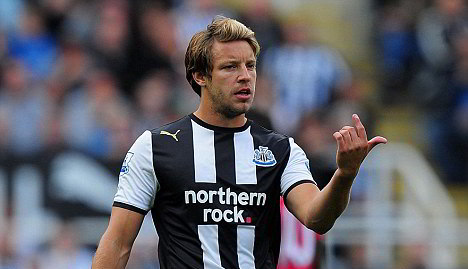 I remember the day we signed Alan Smith quite well, the start of August 2007 - another ‘coup’ by Allardyce, or seemingly so. He arrived for £6m, a decent fee to pay for someone who was just returning from a serious injury. Pay for it we did. After signing a 5 and a half year deal at a modest £60,000 a week, Smith has never had a grip on the first team and at the end of June he will depart Newcastle United on a  free transfer. To really cap a fall from grace, Smith played the end of this season on loan at MK Dons of League 1. From playing Champions League football with Leeds United & Manchester United, to starting midfield for a team a whole two divisions below the Premier League - it was a heavy fall rather than a graceful one for Alan.

Above anyone else, I think Mike Ashley will the happiest to see Smith leave the club. Since he bought the club, Ashley has paid out millions to Alan, with almost nothing in return. Injuries hampered any chances he actually had of starting the team - while the sacking of Sam Allardyce didn't do him any favours either.

When I say ‘disappointing generation’ I mean players in the last five or six years that have commanded high fees & wages from NUFC, and in return, brought the club into the mire. The likes of Viduka, Claudio Cacapa, Damien Duff all helped Newcastle United towards relegation and then abandoned the club when it's league status was confirmed.

The only credit I can give Alan Smith is that he had a half-decent season in the Championship with us. He played quite a few games and helped us back into the Premier League at the first time of asking. However, as soon as we reached the PL, he didn't see a lot of first team football for various reasons.

As passionate as Smith is, and as good an influence he is around the training ground & dressing-room; its time for him to leave Tyneside and look for a new club. Perhaps a newly promoted team will take him on purely for experience, Big Sam may well fancy signing him up for some unfinished business.

The good news is that we'll now have almost £3.5m extra in wages to cover any incoming signings. Financially, NUFC is getting healthier all the time. Finishing 5th in the Premier League means a lot more cash than we managed last season too - the books are looking good.

What's your opinion on Smudger?