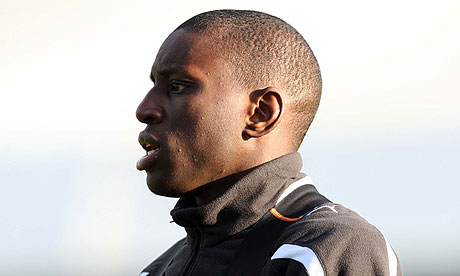 Demba Ba arrived at Newcastle on a free transfer just less than a year ago, after impressing during a short stint at relegated West Ham. He scored goals as soon as he touched down in London, but couldn't save Avram Grant's Hammers from going down. A clause in his contract confirmed that he would be able to leave Upton Park on a free transfer should he endure relegation, and that's when NUFC moved in. In the first half of the season with us he couldn't stop scoring, and had amassed 16 at Christmas. He looked destined to hit the 20 goal mark, however it didn't happen. The arrival of his international teammate Papiss Cissé saw Ba deployed on the left-wing, and rather than score goals, Demba spent the second half of the season setting them up for our new #9.

In January gone by, Harry Redknapp - who happened to be panicking about our strong challenge for fourth spot - told the media of a £7m release clause in Ba's contract, sparking the speculation we have to this very day.

Ba has repeatedly denied that he is eyeing up a move away from St.James’ Park but the Senegalese forward has never confirmed that he wouldn't welcome an approach from another club. Thankfully, there weren't any approaches in January, and most NUFC fans are praying that there aren't any this summer either.

Unfortunately, there are likely to be a few inquiries about him. The reports of a £7m release clause are off the mark though, and we've been told at TyneTime that it is around the £10m range. With that said, it would still represent value to other teams. Considering someone who scored 11 goals by January last season merited a £35m move - then ten million for a 16 goal a season man isn't bad value at all.

News in the last 24 hours has indicated that Newcastle United are unwilling to renegotiate an improved contract for Ba, which would see the release clause removed, at the expensive of perhaps doubling his wages. I would be 100% behind the board in this decision.

He has only been here a year and we were the only club to take a gamble on him, with his much talked about knee. Realistically, Demba owes us for the chance we've given him in the top flight of English football but as we all know by now - players and club respect do not really go together very well.

There's absolutely no need to hand him a new bumper contract for the sake of removing a clause. If he is approached by a bigger club then I suspect he'll leave without hesitation anyway, and play his football elsewhere. However, some of the clubs that have been linked to him wouldn't stand much of a chance of landing him.

Liverpool have been linked. Would Demba consider the team that finished 3 places below us in the league? I don't think so, and they're managerless at the minute so linking Ba to the Anfield outfit just seems like lazy journalism.

Should Ba leave, and it is a real possibility so let's not fool ourselves, then Newcastle United will likely turn to FC Twente forward Luuk de Jong; a very exciting prospect should we land him.

The main thing about this Ba rigmarole is the fact we won't be left hanging. We have potential replacements lined up should Demba depart Tyneside, and remember, we have always have Shola Ameobi. 😉