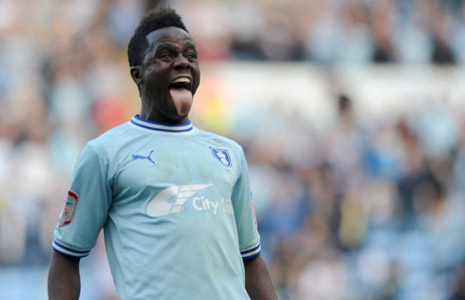 There are quite strong reports bouncing around that Alan Pardew is very close to his second signing of the summer transfer window in the shape of Coventry City youngster Gael Bigirimana. The Sky Blues man is a midfielder, which - any time I've seen him play at least - drops quite deep and hassles opposition a bit like Tioté. Not only does he look like the Ivorian, it seems like he might be a similar player in the type of game he likes to play. However, some Coventry City fans have mentioned that he's not bad going forward either, with some touting him as the next Essien!

Their manager, is hoping that the midfielder doesn't make a move away from the Ricoh Arena:

‘Gael's a good talent but he's still got a heck of a lot to learn and I'd be really disappointed if he left.’

‘He's in there and very much part of my plans and I'd love to see him continue his development with us. I think it's really important at his age that he's playing competitive football. I'd love him to be part of it.’

I don't think Bigirimana - who happens to be part of the Congolese U-18 setup - would think twice about leaving Coventry to join Newcastle United, and learn from the likes of Tioté & it is definitely worth noting that Coventry City were relegated to League 1 this season after an abysmal season.

The fee is rumoured to be in the region of £1m, but we've it on quite decent account, that it is closer to the £750,000 mark - which to a Premier League team is pennies, but decent bucks for a team playing their football in the third division of England.

Burnley were expected to make a move for him in March, but nothing materialized and it looks like Graham Carr and Pardew are ready to pounce for the 18 year-old.

Again, we've been linked with good young talent, and if this fella arrives, then it's hard not to be excited about his potential.

Of course all the pessimists will say we're looking for Bigirimana because Cheik Tioté could be lining up a move away from St.James’ Park but even if he was - I'd much rather have a replacement for him than not.

We've got to be thinking ahead in this window because we're losing players this summer, and that's even before we begin to discuss some of our star men.

If there's any other Coventry City fans out there, do not be afraid to give us your thoughts on Gael in the comments area below!