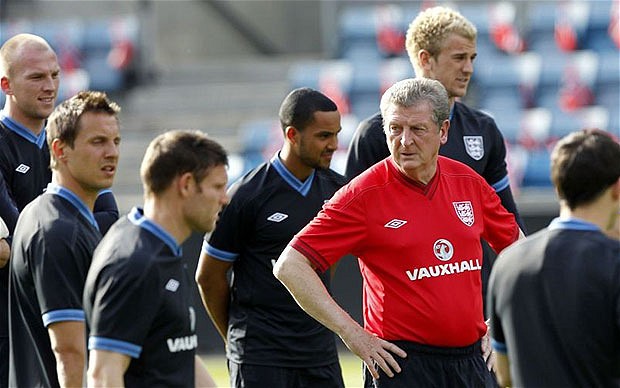 First off, ‘Dream Team’ and England do not really go together. Secondly, the following line-up might surprise you just a little. Folks over at Bwin have asked us to to draw up our starting eleven for England at the Euro's. The first 11 include injured players, and indeed players that aren't even in the squad - so this is a team we would have selected before all the injuries occurred. We're also ignoring suspensions just in case you're wondering. A lot of people have been complaining about Hodgson's selections for the coming Euro 2012 campaign, and the inclusions of Jordan Henderson, Jack Butland, and even Andy Carroll have raised a few eyebrows. However, we've an alternative team below, and a quick reason why we've chosen each player.

Let's be honest - England don't have a great chance of winning this competition with the team they've brought out. While I'm a fan of Roy Hodgson and think he is indeed the right fellow for the job - he will need time to instill his own mentality in the team and impliment his own system.

We may not see the fruits of his labour for a couple of years, and more importantly, when the bigger egos in the dressing-room hang up their boots. With that said, Hodgson will give as good a display as most England managers in the past.

It has often been touted as the poisoned chalice, but with the right man at the fore and hardworking team players at his disposal - England could surpass their performances in past major tournaments, and some day - might even win a medal! 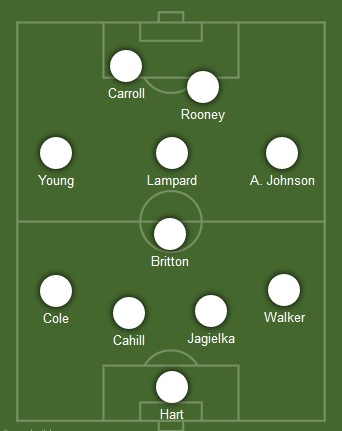 The best England can offer between the sticks at the moment, and it isn't bad at all. The young man has just won a Premier League title, and was quite influential in winning it as well - even his save from Ben Arfa at St.James’ Park when the sides were tied 0-0 played a huge part in helping City win on Tyneside, and securing what proved an imperative three points.  Very good goalkeeper, with a winning mentality of late.

He's injured, I know. However, there's little doubt for me at least that if he wasn't sidelined - he'd be starting ahead of Glen Johnson in the Euro's. Fast, gets forward & helps out and has a decent strike. His defending ain't bad either. Best RB in the Premier League at the minute, and seems like someone who just wants to learn and learn.

Underrated in my opinion. Does well in the air, and can string a few decent passes together. If England want to do well in the competition and get out of the groups at least, they'll need defenders who can play the ball on the deck comfortably, and win their fair share of aerial duels. Jagielka is one of those players.

Another member of the team that has tasted major success and is hungry for more. Cahill had a fantastic game at both the Nou Camp and indeed in Munich in the Champions League final - showing why Chelsea bought him in the first place. He too, is good in the air and can find that  pass. Full of confidence and has experience in a major final. Definite starter for me.

Probably the best left-back in the world at the minute. Even at 32 years of age he has legs to fly up and down the left side for 90 minutes. Loves to get forward and link up with wingers, while his ability to mark tricky opposition is second to none. Just like Cahill, he experienced a major European victory, and as we know; experience is paramount in a tournament like this.

I don't think a lot of you would have expected this choice, but his performances this year speak for themselves. With over a 90% pass completion rate this season, Britton is obviously fairly accurate when it comes to stringing an a pass! With the likes of France, and even Sweden likely to have a lot of the ball - when England get it they'll need to use it wisely. Leon Britton's ability to retain and distribute effectively sees him make my starting 11.

Lampard's performances in an England shirt have often been criticised. However, no managers in the past ever played him to his strengths. Trying to incorporate both Gerrard and Lampard in the one midfield has actually restricted both of them from having very successful international careers. Lampard - one of 3 Champions League winners in my team - has experience, and one major international outing left in his locker. Give him a more attacking role, and let him pick out passes for the forwards. I think we'd see a different Lamps if he was given a certain freedom.

There aren't many naturally left-footed out-and-out wingers like him in the UK. His ability to dart inside the fullback before either picking out a pass or having a shot makes him a LB's worst nightmare. Not to mention he can vary it and burst down the flank before whipping a ball across. Unfortunately we didn't see much of him at City this year, someone by the name of David Silva didn't give him much chance of a starting role.

In fairness, Young should probably be training with Tom Daley for the upcoming Olympics in London but he's making the trip to Ukraine instead. All jokes aside, when Ashley is on form he is a very difficult man to mark. He has a good cross, and a certain flair about him - alike the man just directly above, Young can cut inside the fullback and mix things up. Definite starter for me and Roy.

Always making the teamsheet of any team in the world. Not much needs to be said about Wayne on his day, he is a big handful to deal with. Given a chance he'll usually bury it, but in my formation he can also come that bit deeper to collect the ball if the service to the forwards isn't up to scratch. He'll also be eager to taste some success after losing out to bitter rivals City in the title race.

Towards the end of the season we were beginning to see the Andy Carroll of old. In the FA Cup he changed the game and on another day would've brought the tie to extra time - all of that after heading Liverpool into the final in the dying seconds against Everton. I think he'll do quite well in Ukraine. Any decent delivery from Young or Johnson and he'll get his head onto it. Whether he's heading towards goal, or laying them off to Wayne Rooney, Andy will cause problems for any back four in the competition. I'd like to see him grab a couple of goals and I think he'll do exactly that. It's always nice to see a Geordie lead the line at a Euro Championship again, we wish him the best of luck!

Overall, this line-up isn't meant to be taken too seriously but I actually think it'd do alright in Ukraine.

I don't think England will win the tournament with the team they've brought out, but I do think they'll surprise a few people in how far they go. With no Rooney for a little while, the bet I'd take would be Andy Carroll being England's Top Goalscorer at 5/1.

Who do you lot think? Who would make up your starting 11? Tell us in the comments box!