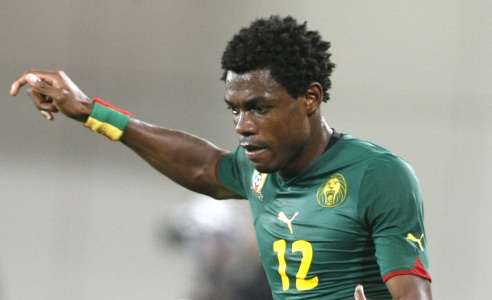 Everyday brings a different rumour for Newcastle United fans. If it isn't Cheick Tioté departing for Stamford Bridge, it's us having a bid rejected for a potential target. In other words, it is sort of routine for NUFC fans at this stage. The latest name to be linked with us is a certain Henri Bedimo, from Ligue 1 champions Montpellier. This must be the first time we've been linked with a player plying his trade in France's top league? Anyway, the news of the interest comes from France itself and although some of their newspapers over there are slightly more reliable than some of the extremely questionable tabloids over here - everything must be taken with a pinch of salt regarding NUFC.

First off, the guy is 28 years of age and I think this is where the rumour meets its death. We have a policy in place at Newcastle United where we do not sign players over the age of 26. Papiss Cissé just qualified as he was twenty-six years of age, and had glowing recommendations from Graham Carr and the team around him. Since the 3rd of June, Papiss Cissé has turned 27 years old, the same age as Demba Ba; who might not partner the #9 in a NUFC shirt, next season.

I can't say I have watched a lot of Bedimo but from asking a few French magpies, they say he is a very decent defender but we could do far better. At St.James’ Park, we only want the best and there isn't a lot of room for errors, especially with Mike Ashley in charge. The plan that the hierarchy of this club is working and we cannot argue with that. A 5th place finish in the Premier League on our second season after returning from the nPower Championship justifies the blueprint that the billionaire has laid out - as frustrating as it might be to watch some of our players leave to bigger clubs.

As you might know, we have shown real interest in Ajax's Vurnon Anita & , Lille's Mathieu Debuchy, Coventry City's Gael Bigirimana and FC Twente's Luuk de Jong but no deals have materialised just yet. Debuchy - our #1 target - wants a move to Newcastle United and is reportedly ready to shun interest from Inter Milan in order to play at the same club as his best mate: Yohan Cabaye.

Bedimo on the other hand is probably only a smokescreen for deal we are working on elsewhere - this is the type of market we have today unfortunately. Clubs use players, players use clubs. Remember Youssouf Mulumbu's agent claimed interest from NUFC? That, is the oldest trick in the book to get other clubs interested and although we might actually have some desire to bring the West Brom midfielder to St.James’ Park - he and his agent will jump at the biggest offer & you can be sure that it won't be NUFC's.!

Anyway, we just have to keep wading through these countless rumours. I'm sure we'll get our hands on someone exciting, and hopefully, in the meantime won't lose too many key men, if any!

In the short-term we will lose Demba and Papiss to the Olympics that are taking place in London this summer. Senegal might well come close to winning gold at it too, and if you fancy a punt, be sure to check out betfair.com for the latest odds on any sporting event.